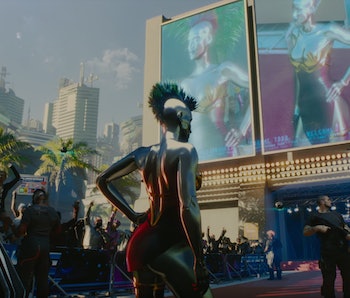 Fans can’t stop asking if Cyberpunk 2077, the highly anticipated new game from the developer behind the massively popular Witcher series, will connect to those older titles. Now, the game’s director is finally weighing in, but you might not like his answer.

You can’t really blame fans for holding onto the theory that developer CD Projekt RED’s two franchises coexist in a shared universe. After all, Cyberpunk 2077 was referenced in The Witcher 3 in a scene where Ciri recounts her dimension-hopping adventures to her foster father and mentor, Geralt. On one particular trip, she visited a world where people had metal in their eyes, fought from a distance using “things similar to megascopes”, and zipped around in their own personal flying ships. Sound familiar?

For all the crazy things Geralt has seen and the monsters he’s slain, he still doesn’t believe Ciri. Unfortunately for Cyberpunk 2077 game director Adam Badowski, a lot of fans did. What was intended to be a throwaway scene has since become a rallying call for canon.

One fan has even made a mash-up of Ciri’s dialogue which seems to match up suspiciously well with the Cyberpunk 2077 trailer.

So when Polygon popped the question, Badowski was quick to shoot down the rumors (and take a shot at another franchise at the same time).

“We are not Kingdom Hearts,” he said. “We are not joining universes, and I know that there are a lot of fans on the team and they would like to have Ciri in the game. But I am totally against it, still.”

CD Projekt RED is not the first company to experience this, of course. Watch Dogs had several references to Ubisoft’s flagship franchise Assassin’s Creed, but Ubisoft Montreal narrative director Darby McDevitt clarified that these were just fun Easter eggs with no bigger implications. However, a follow-up reference in Assassin’s Creed Origins seemed to confirm that both franchises are indeed in a shared universe. So maybe Ubisoft finally relented to the fan theory.

That’s a good precedent for fans who want to see Ciri appear in Cyberpunk 2077, and not so good for Badowski. Sorry, Adam.

Despite Badowski’s protests, there’s a decent chance we could see Ciri in the game, though it’ll be fairly difficult to pick her out. Night City seems like the type of place a silver-haired young woman could easily hide in.

More like this
Gaming
Jan. 29, 2023
You need to play the most hardcore sci-fi platformer ASAP
By David Grossman
Gaming
Jan. 25, 2023
Redfall is Bethesda’s vampire-infested co-op shooter — what to know
By Jess Reyes
Entertainment
Feb. 4, 2023
The Last of Us Episode 4 trailer teases the entrance of Melanie Lynskey’s character
By Claire Fox
LEARN SOMETHING NEW EVERY DAY.
Related Tags
Share: