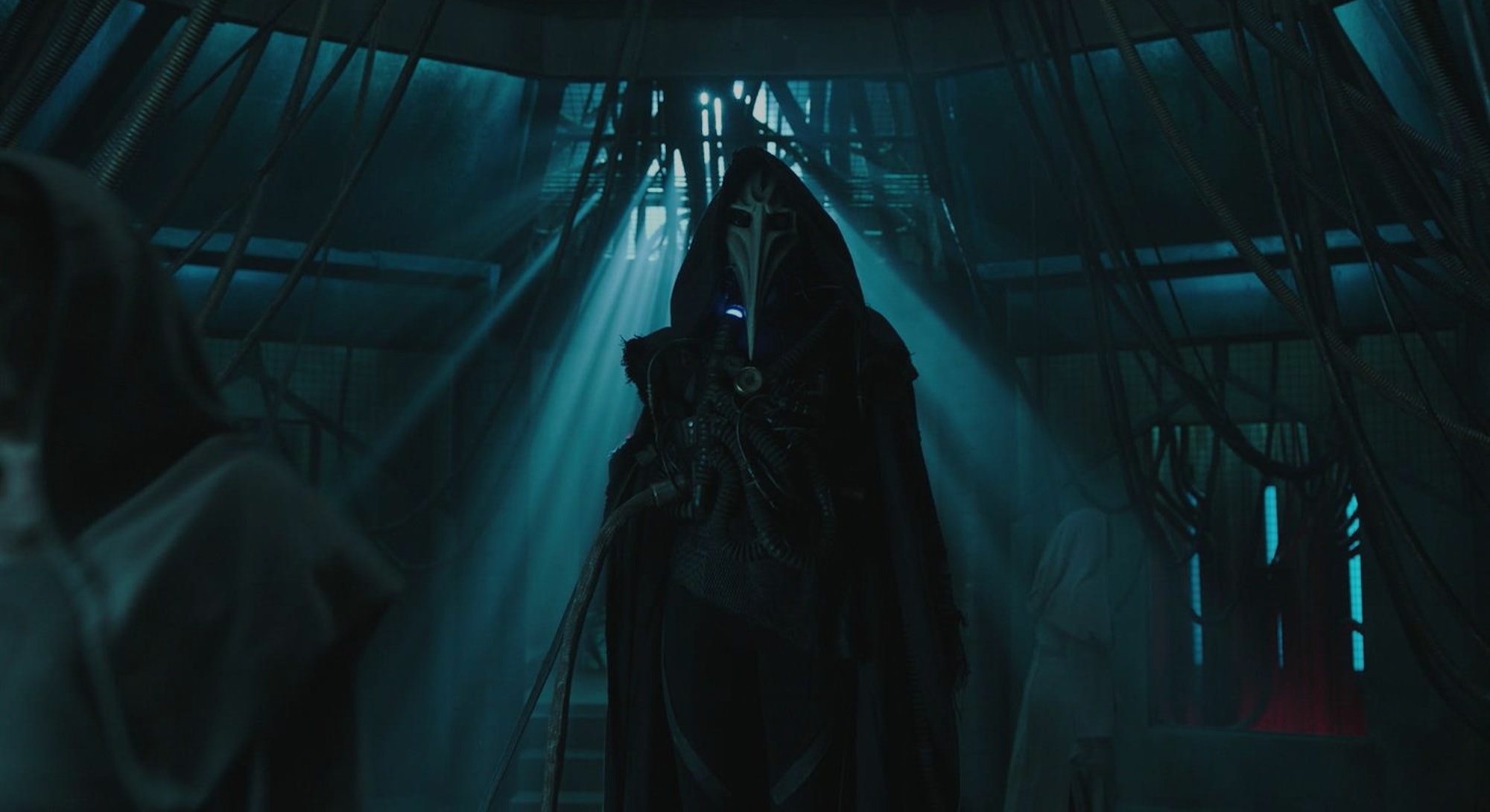 12 Monkeys has explored this mind-bending concept in previous seasons, and now, in its fourth and final season, it delves further into the idea by bringing on a scientific advisor to breathe a real-life scientific proposal into what may at first appear to be a fantastical notion.

This article contains spoilers for 12 Monkeys Seasons 1 through 3.

The Syfy series is based on the 1995 Terry Gilliam-directed film of the same name. It follows a man’s journey back in time to prevent a plague that wipes out nearly all of humanity. In the TV show’s broadened mythology, there is even more at stake than the billions of lives lost in the wake of a pandemic — time itself. The show’s antagonists seek to destroy time and create a state they call the Red Forest, where, supposedly, without time, there is no death.

In preparing for season 4, which premiered last week, writers assistant Sarah Mueller came across something called the Hartle-Hawking state. As 12 Monkeys showrunner Terry Matalas tells Inverse: “The more we looked at it, we thought, that seems to be the Red Forest — at least what the Army of the 12 Monkeys view it as.”

What Is the Hartle-Hawking State?

The late, great Stephen Hawking and physicist James Hartle first proposed the concept back in 1983, positing that prior to the Big Bang, there was space but no time. Before the beginning of time, well, there wasn’t any.

“When the universe was a really small, really dense thing, space and time are separate entities, such that time doesn’t exist,” Sophia Nasr, a cosmologist currently working on a Ph.D. at the University of California, Irvine, tells Inverse.

Nasr, who consulted on Season 4, notes one major caveat to applying this wave function — a variable that’s at the heart of a lot of quantum physics — to our own universe: “The Hartle-Hawking state predicts that we live in a closed universe. It contradicts what our observations tell us.”

Our universe — the one you and I are living in right now — appears to be an open universe, which isn’t a good fit for the Hartle and Hawking’s proposal. An open universe is infinite, and gravity between objects is unable to stop or reverse the expansion of the universe. In the model of a closed universe, though, the universe has a finite size, and space is roughly spherical. An object moving in a straight line in a closed universe would eventually return to its starting point, much like someone traveling around the Earth.

Hawking himself acknowledged in lectures that his and Hartle’s proposal is a hypothesis that would require testing.

“So the Hartle-Hawking state, as it is now — it needs work,” Nasr says.

It’s a complicated, imperfect concept, even for trained physicists to wrap their minds around, so it’s only natural that the 12 Monkeys writers might need a little help. So, to better apply the Hartle-Hawking state to their story, the 12 Monkeys writing staff got in touch with Nasr.

Nasr was already familiar with 12 Monkeys before she joined the team, as it was her tweets praising the series that first got the attention of Matalas, the showrunner. Once Matlas realized Nasr could lend her scientific expertise to season 4, he reached out. Nasr was eager to pitch in — and not just because she was a fan.

The opportunity to consult on 12 Monkeys is in sync with some things important to Nasr: making science accessible to everyone, especially people who are often less welcomed into STEM, namely girls. 12 Monkeys, a show that counts a female scientist among its main characters, was another way for Nasr’s work to reach people outside of academia.

“I wish they knew that we’re not all men with white scraggly hair,” Nasr says of the general public’s perception of STEM fields. “I don’t think that that has been brought home yet. It’s getting there.”

She does acknowledge that young men are still more encouraged to partake in STEM than young women. “It’s still a problem — it’s the way people teach,” she says, pointing out that girls are still pushed toward extracurricular activities that involve dance, for example, more than science. “But that’s not to say that [women] aren’t interested, mind you. There’s a lot of us who are in this already and interested it. The problem here is keeping us here, creating a safe and welcoming environment for women.”

Sophia Nasr on the 12 Monkeys set, in front of the chalk board with the equations she prepared.

To Nasr, being active on social media is about more than sharing photos of her dwarf hamsters (whom she named after elementary particles): She sees the younger female generation as a key audience, and she considers science communication important because she wants to “break down the stereotype that science is really hard, that physics is really difficult, that it’s something that’s an enigma.”

“I want to break that down and show people the exciting stuff,” she adds.

At UC Irvine, Nasr’s research focuses on self-interacting dark matter (SIDM). Exactly what dark matter is made of remains a mystery, and that’s what excites Nasr about her work: the possibility of identifying particles that do not fit into the Standard Model of particle physics.

“What I love about what I do is it’s paving the way to do something really big,” Nasr says. “This huge effort to find this particle — where is it, what is it, we don’t know, right? — that’s really exciting because at some point we’re going to find out what that is and I’ll learn whether the theory I was working on was correct or wrong or how it was wrong, and that’s really exciting.

The abundance of mysteries left to solve even after centuries of scientific discovery — “that’s the beauty of physics, the beauty of the universe,” Nasr says. “There’s so much to learn.”

The Hartle-Hawking State on 12 Monkeys

Even when it comes to the Hartle-Hawking state, there have been new developments since 12 Monkeys’ fourth season was written and shot. Following Hawking’s death earlier this year, the Journal of High Energy Physics published a paper in May co-authored by Hawking and Belgian physicist Thomas Hertog that put forth a new theory that partially serves as an update to the Hartle-Hawking state. This new work — among the final research of the celebrated physicist before his death — may enable cosmologists to make more reliable predictions about the structure of the universe.

Do these very updates detract from the Hartle-Hawking state’s depiction on 12 Monkeys? No, Nasr says eagerly. “It’s sci-fi, right, so it’s okay!”

With multiple time travel shows currently on the air, 12 Monkeys actually manages to stand out in part because it often leans more fantasy than science fiction (powerful beings called Primaries help time think, and a prophecy reveals one character to be the chosen one who can save time, for instance). Matalas tells Inverse that before bringing Nasr aboard, the only scientists the showrunners had ever consulted with were viral experts, early on in work for Season 1.

Nasr’s consultation on the show lends a sense of legitimacy to discussions of the Hartle-Hawking state that come into the episode titled “Legacy,” airing tonight on Syfy. Below is an Inverse-exclusive clip with a flashback scene set before the plague, featuring the show’s time machine expert, Dr. Katerina Jones (Barbara Sukowa), as her husband, Dr. Elliot Jones (Peter Outerbridge), eagerly talks about the Hartle-Hawking state.

This isn’t the Hartle-Hawking state’s only mention in “Legacy,” and it’s also key to “Daughters,” the episode set to air on June 29. In that episode, there’s a prominent blackboard that’s covered with equations related to the Hartle-Hawking state — and Nasr prepared them all. The scientist traveled back to her hometown to visit the show’s Toronto set and observe as a member of the set decoration team wrote her equations on the board. Plus, she got to meet all of the many of the actors working on the show, which she’d been a longtime fan of. “These people are just amazing, all of them,” Nasr says.

Will Olivia and the Army of the 12 Monkeys succeed in recreating something like the Hartle-Hawking state? That has yet to be seen, but Matalas teased this much: the Red Forest may be enticing not just to the show’s villains but also to its heroes, particularly Cassie (Amanda Schull), who briefly admitted in season 2 that the Red Forest sounds “almost beautiful.”

“At least from their perspective — the Army of the 12 Monkeys — [the Red Forest] seems to be a state that they believe your conscience can decide where to be and what to do with it. Whether or not they’re right or wrong is up for debate,” Matalas says. “The Army of the 12 Monkeys makes a lot of solid arguments — time is a destructive force for everything. For someone like Cassie who has witnessed a lot of pain and cares deeply about these people, it’s kind of starting to make more sense to her.”