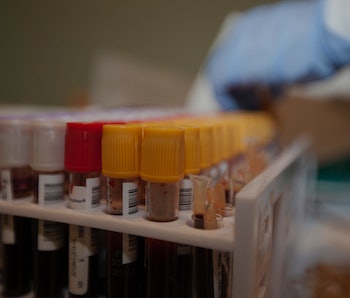 A team at the University of Maryland Baltimore County is looking to help you heal yourself and, potentially, usher in a new era for personalized medicine. Their new study published in Scientific Reports highlights a new way of using human blood to produce therapeutic proteins. In short, they want to make medicine that is as unique as you claim to be.

Medicines grown inside cells or “biologics” have been a buzzword in the 21st-century medical community, but they’re facing an uphill battle against cost. Right now, one way to produce therapeutic proteins (think things like insulin), is to grow them in the cells of E. Coli or Chinese hamster ovary cells.

“This can take many months to do, and it typically takes a billion dollar plant and a facility that’s an acre size,” Dr. Govind Rao, study author and a professor of Chemical and Biochemical Engineering tells Inverse.

Rao’s study investigated a way to make biologics that was “cell-free;” meaning that he is able to take a cell, strip away the nucleus and membranes, and turn it into a tiny protein-producing machine called a “cell extract”. Then, you can pop in the DNA of the protein you need to make and the cells will manufacture it naturally.

Rao, whose lab is on a mission to drive down the costs of medicine — he is particularly proud of his low-cost cardboard incubator for newborns — was still concerned that they needed a cheap but abundant source of cells that they could then manipulate the make therapeutic proteins.

“It would be great if you could have a low-cost source of cell extract,” Rao says. “And then I thought, well everyone is full of cells, why not try making the extract from human blood. And we tried it and low and behold it worked.”

There is one important caveat to this procedure. The yield of protein is very low, Rao explains. But the application, if this technology should work on a large scale, could be impactful. He explains that since we know how to detect and create antigens for diseases like Ebola and Zika, we can use the machinery in patient’s own leukocytes — or white blood cells — to generate protectionist antigens that would fight off either of those infections. Then, you would inject the antigens back into the patient.

“They then have the antigens in their own blood generated by their own machinery and potentially you’ve just immunized a population directly,” he says.

There are still clinical trials to be done, and scientists will have to fully study what types of other immune responses could be the consequences of this procedure. This study was solely intended to show that human blood cells are potential candidates for a “cell-free” approach to biologics. But for now, it presents a new path as science moves toward more personalized approaches to treatment.

More like this
Science
5.16.2022 10:00 AM
Pig-human heart transplants still have a long way to go
By Andrew Fenton, The Conversation and Françoise Baylis
Science
5.14.2022 12:30 PM
Omicron subvariants: An epidemiologist answers 5 essential questions
By Louis Jacobson and Kaiser Health News
Mind and Body
5.17.2022 8:41 PM
Mysterious hepatitis outbreaks in children are confounding doctors — here's why the cause is still unclear
By Katie MacBride
Related Tags
Share: