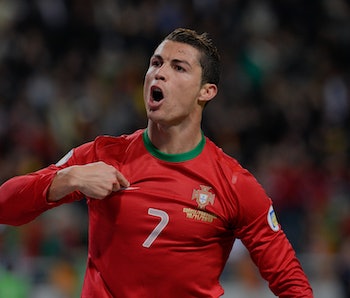 On Wednesday, Cristiano Ronaldo ascended to the second-highest place in the FIFA pantheon: He is now officially the second-highest goal scorer in men’s international soccer. But what captivated fans wasn’t that Ronaldo scores tons of goals (we’re used it by now); it’s that he scored this goal on what has been deemed a “diving bullet header.” As biomedical engineer Dr. Charles Babb tells Inverse, the move was a stunning feat of physics.

Around four minutes into Portugal’s match versus Morocco, Ronaldo dove head-first through the chaotic penalty box, making contact with a cross from Joao Moutinho. From a physics perspective, this header was “picture perfect for both effectiveness and safety,” says Babb, a Purdue University researcher who wrote a paper titled “Biomechanics of Heading a Soccer Ball: Implications for Player Safety” in 2001.

Babb broke down Ronaldo’s perfect goal into the components that would maximize effectiveness and keep his brain relatively stable as he flew through the air. First, he says, the secret to doing a perfect header is to put as much body weight behind the ball as possible, which will limit the amount of post-header acceleration on the head and neck. If done while standing, this should mean that roughly half the player’s mass will contact the ball. Babb estimates that it’s somewhere around 80 kg. That means that about 40 kg of Ronaldo made contact with ball.

But Ronaldo wasn’t standing. Instead, he dove gracefully through the air. “He had a very large “effective mass” behind the shot because he laid out his whole body in a diving header,” Babb explains. “With a layout diving header, the effective mass will be close to all the player’s body weight.” Putting the full force of his body would cut the amount of of post-header acceleration on Ronaldo’s head in half, which would protect against head injury, according to Babb’s earlier work.

This also would have ensured that Ronaldo put the maximum amount of velocity behind the cross, using the full strength of his Calvin Klein-model body to lead Portugal to victory. That said, he shot high and wild for the rest of the match and also botched two free kicks. But given the perfection of this goal, it seems as if his fans are ready to forgive him.

Now, Ronaldo doesn’t just have the honor of being the second-highest scorer in men’s international soccer. We can give him a few bonus points for perfect technique and safety, too.

More like this
Mind and Body
18 hours ago
New study disputes a common belief about treating trauma-linked depression
By Sarah Sloat
Mind and Body
Oct. 1, 2022
How important is breakfast, really? A health expert explains how to do it right
By Elana Spivack
Mind and Body
Sep. 28, 2022
A new viral cousin of Covid-19 can resist vaccine immunity, study finds
By Miriam Fauzia
Related Tags
Share: