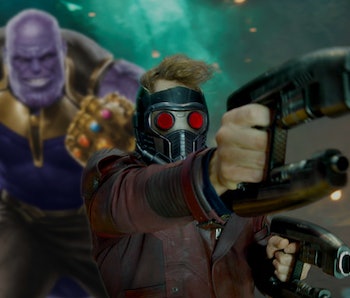 Avengers: Infinity War caused a problem for the heroes of the MCU, because it ended with half of them getting turned to ash. The movie also gave Marvel Studios a bit of a headache, because it has to deal with fans who are trying to reconcile how there can be a third Guardians of the Galaxy and Black Panther sequel if those characters are… dead. For a while, it seemed folks involved were trying to suggest that the movies could take place before Infinity War, which could make those deaths stick.

James Gunn, the director behind Guardians of the Galaxy, has, mercifully, put an end to this bullshit, having confirmed when vol. 3 will take place.

“Mr. James, Guardians of the Galaxy vol. 3 will be before of infinity war? [sic]” a fan tweeted on Monday. Gunn’s early morning response was short, sweet, and blessedly to the point:

If you’ve been following the goings-on of the MCU, Gunn’s confirmation is a relief. In a June interview with HuffPost Infinity War’s directors Anthony and Joe Russo attempted to convince fans that the deaths in Infinity War might actually be permanent.

“Just because there’s a sequel on the books doesn’t mean … people become accustomed to time moving linearly in the MCU,” Anthony Russo said. “That doesn’t necessarily have to be the case. There’s a lot of very inventive ways of where the story can go from here.”

There’s four years between ‘Guardians 2’ and ‘Infinity War.’ That’s a long time, and a lot of ‘Guardians’ stories to tell,” Joe added. “Again, as Anthony said, don’t expect everything to move forward in a linear fashion in the Marvel universe.”

Chris Pratt, who plays Star-Lord, is also trying to deceive you. On the red carpet for the MTV movie awards on Monday, he told MTV that vol. 3 “might take place in the past. It might be a prequel.”

Gunn’s comments expose this attempted misdirection for what it is. Guardians of the Galaxy vol. 3 takes place after Infinity War and those deaths ain’t permanent.

Guardians of the Galaxy vol. 3 comes out in 2020, while Avengers 4, the movie that’ll almost certainly undo the Infinity War deaths, arrives on May 3, 2019.