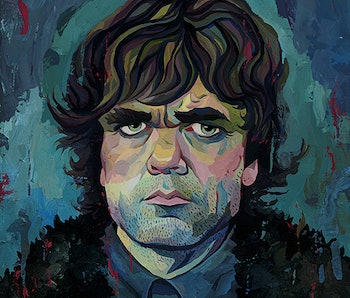 Rich Pellegrino’s pop-culture portraits feel immediate, almost hypnotically intrusive. His subjects stare back from a fixed universe of vibrant palettes cultivated with a specific purpose. As with any pop culture artist, I found myself curious about his motivations, his subjectiveness with his work, and his decisions to paint what, when.

I spoke to the Boston-based artist about his work and felt his passion, both about the portraits and their genesis. While weaving together his own portrait of the modern pop-culture zeitgeist, Rich also discussed the rampant sexism plaguing Hollywood tentpole projects and popular genres.

Regarding Rich’s color palette choices, namely in the portrait of Breaking Bad’s Walter White (Bryan Cranston), one of the most sinister characters in television history, accented with light pastels:

“I found it fascinating,” Pellegrino said, “how his characters evolved over the series: a wholesome and innocent man turned megalomaniac addicted to power and murder.” He also pointed to the Beatles’ song “Maxwell’s Silver Hammer,” which he called “a light and airy sound against dark lyrics.”

The same can be said for Pellegrino’s portrait of Imperator Furiosa (Charlize Theron) from Mad Max: Fury Road. What was more striking, when considering the Furiosa piece, was Pellegrino’s propensity to use male figures as his subjects.

“It isn’t intentional,” Pellegrino said. “I paint much more than male leads. That said, I am drawn to strong characters, and in the genre[s] in which I gravitate towards, there is a heavy emphasis on male leads.” This reach for strength led Rich to Furiosa.

“It was a breath of fresh air to see Charlize Theron in Mad Max take on the lead role in a major feature film within the sci-fi/fantasy genre. American cinema and TV are in dire need of a shakeup in this respect. For me, when a movie like Mad Max steps outside of its stereotyped gender roles it is a definite breath of fresh air.”

On what motivates his decisions, what inspires his next project:

“Most of the time,” he said, “I find myself reliving my youth through these paintings. I find the 80s and 90s to have some of the richest fiction for kids.” He went on to discuss the somewhat morose nature of current kid-based fiction, animation, and the like.

“When I look at the cartoons of today, I find that they are overly dark, serious, and full of complicated issues… When I was a kid all I wanted to do was play with my toys. I got the serious stuff from my parents and G.I. Joe’s PSAs.”

On his future work and direction:

“Now that my Blue Moon painting is on (beer) labels this summer… I’ve been interested in juxtaposing the figure and marine/animal life in darker narratives,” he said. Pellegrino pointed to his recent “Cat and a Woman” work as his first foray into darker waters. “My work will be transitioning heavily in this direction.”