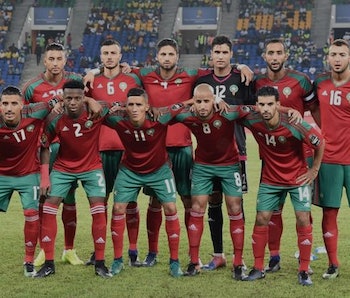 Morocco may have lost its bid to host the 2016 World Cup this week, but its 2018 World Cup may get off to a good start. The small country play Iran in Russia on Friday (the match airs at 11 a.m. Eastern) in the third match of the tournament.

To predict the winner of Egypt vs. Uruguay on Friday, a group of 27 soccer experts sitting at computers across the United States and Europe used machine-learning technology to form a hive mind and collectively project the outcome.

The San Francisco-based technology firm Unanimous A.I. developed a basic web-based interface that does something remarkable: It forces people to work as a group, using the power of collective human intelligence. Creator Louis Rosenberg, Ph.D., thinks his software can go toe-to-toe with the intelligence of neural networks being developed by Google, Apple, IBM, and other major technology firms. (Rosenberg does have people on his side, though.)

To make a decision, each swarm participant logs in and controls a little golden magnet, sort of like a micro video game. Each person uses the magnet to drag a glass-looking puck toward an answer they think is the most likely outcome for each situation. Things get interesting when a user sees the puck being dragged by other members of the swarm; that seems to trigger a psychological response, and the user readjusts their decision. Within a matter of seconds, the swarm builds toward a consensus.

As the animation below shows, this week’s bad news for Morocco stopped with its loss to the Canada/Mexico/United States for the 2016 World Cup. This year is be Morocco’s first World Cup in twenty years and a historic in that regard. If Iran wins, it will be the first victory in a World Cup since they beat the United States in 1998. The swarm decided with 89 percent confidence that Morocco will win over Iran in Friday’s World Cup group stage match by one goal.

The World Cup is famous for generation-defining upsets, but Rosenberg believes in his technology, and its effectiveness has been borne out: Swarms have made correct predictions for the NCAA Tournament, the 2016 Kentucky Derby, and even the 2018 Oscars.

The A.I. comes in to help smooth out the movement of the group and make its move toward a decision more graceful and efficient. Even the best A.I. needs a little real-world behavior to inform its decisions.