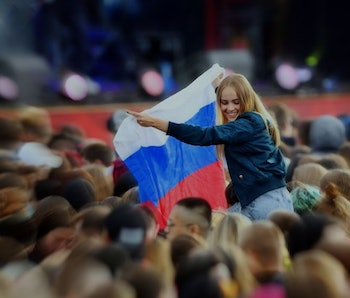 A temporary ban on the sale and transportation of hazardous chemicals during the World Cup in Russia sounds like a good idea, right? Wrong, if you’re a scientist just trying to get your damn work done.

In the name of national security and counter-terrorism, Russia has suspended the movement of toxic and radioactive chemicals in cities hosting World Cup matches, including Moscow.

Not only is Moscow a great place to watch a soccer game and a cultural hub, but it’s also a major city for many Russian scientists to work and study in. Now their work is being impeded.

Much of the molecular biology work ongoing in Russia is being put on hold for the duration of the games, and that puts a lot of experimental research at risk, reported Nature on Wednesday. Radioactive nucleotides, an essential component in gene-editing experiments, won’t be delivered to the laboratories that need them. Other toxic reagents have also been cut off for academic use.

It was already difficult to get the necessary chemicals for lab work, Russian academics told Nature. Preorders were necessary weeks in advance to ensure arrival in a country with notoriously difficult delivery services. For students undergoing thesis work, the materials they need may now not arrive until the end of summer, putting their futures in jeopardy.

When the World Cup is held in a volatile country like Russia, intense security is required. Extensive security camera use with face-recognition technology is one line of defense, along with specially trained security forces. Russia’s presence in Syria makes the country a target for a terrorist attack, so the temporary ban on hazardous chemicals is just one of many steps FIFA has taken alongside Vladimir Putin’s administration to ensure a safe competition.

The cities slated for gameplay are dotted across the country, from Yekaterinburg in the east to Kaliningrad in the west. The Russian army, navy, and air force have all been deployed to assist in safety measures, and a string of arrests have been made to put any potential human threats behind bars. The strict regulations on chemicals, along with other counterterrorism efforts, seeks to avoid any casualties during the massively hyped sporting event.