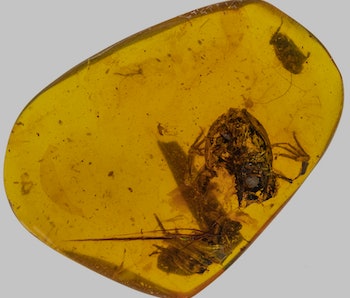 Life’s too short. By the time you’ve figured a few things out, the years have slipped away. All you can do is love others, let yourself be loved, and try to leave the world a better place. Unfortunately, the same can’t necessarily be said for a group of Cretaceous frogs that got trapped in tree sap and preserved in amber, which a team of scientists described in the journal Scientific Reports on Thursday. It’s impossible to say whether these 99-million-year-old frogs loved each other, but as the oldest frogs to be found preserved in amber and the oldest evidence of frogs inhabiting wet tropical forests, they definitely died before they got a chance to see the legacy they left the world.

These days, we’re used to picturing frogs in wet, hot climates, but we don’t know for sure when they began to occupy their preferred ecosystem. Scientists believe that frogs emerged over 200 million years ago, but as with many animals, there exist major gaps in that fossil record, large swaths of evolutionary time for which we have no direct evidence. In this new paper, researchers write that four small pieces of amber found in Myanmar contain evidence that could help fill in the frog’s evolutionary timeline.

“These amber fossils provide direct evidence that frogs inhabited wet tropical forests before the mass extinction event at the end of the Cretaceous,” Lida Xing, an associate professor at China University of Geosciences in Beijing and first author on the paper, tells the BBC. By studying the remains of these four frogs, which are each about 22 millimeters long — as well as the plant, insect, and spider remains trapped in the amber with them — Xing and his colleagues established that about 99 million years ago frogs lived in an environment similar to ones that they currently inhabit.

The study’s authors dubbed the species Electrorana limoae, from the Latin words for “amber” (electrum) and “frog” (rana), as well as Mrs. Mo Li, “who purchased and provided these specimens for study,” they write.

And while the researchers were fortunate to come into possession of the specimens, the quality of the remains did pose issues. As you can see, the frog remains are either ripped apart or curled up, and not one of them remained intact. Fortunately, micro-CT scans allowed the researchers to penetrate the amber to get a better look at the frogs’ anatomies and figure out where they sit in the evolutionary tree.

“Our comparisons of the skeleton of these new frog fossils indicate that these amber-preserved frogs were ‘true frogs’ but may represent one of the most ancient lineages seen today,” David Blackburn, a paleontologist at the Florida Museum of Natural History in Gainesville and one of the authors on the paper, tells Gizmodo. “The presence of ribs and a bone in the cartilaginous plate that supports the tongue suggests an affinity with the species alive today, such as fire-bellied toads and midwife toads.”

They determined that E. limoae is likely an ancestor of these existing species, as well as some that have been long extinct.

Living in a wet environment, most frog specimens from E. limoae’s home environment had no chance of being preserved as fossils, so this amber from Myanmar gave scientists a rare opportunity to glimpse into the tree of life and add one more piece to the puzzle of evolution.

“I can only hope that there are more spectacular fossils to come,” Blackburn tells National Geographic. “In today’s tropical forests, there is a rich diversity of living frog species. So, there might be many more species to discover still in the Cretaceous amber from Myanmar.”

Abstract: Frogs are a familiar and diverse component of tropical forests around the world. Yet there is little direct evidence from the fossil record for the antiquity of this association. We describe four fossil frog specimens from mid-Cretaceous (~99 mya) amber deposits from Kachin State, Myanmar for which the associated fauna provides rich paleoenvironmental context. Microcomputed tomographic analysis provides detailed three-dimensional anatomy for these small frogs, which is generally unavailable for articulated anurans in the Mesozoic. These crown-group anuran specimens provide the earliest direct evidence for anurans in a wet tropical forest. Based on a distinct combination of skeletal characters, at least one specimen has clear similarities to living alytoid frogs as well as several Mesozoic taxa known from the Jehol Biota in China. Whereas many Mesozoic frogs are from seasonal and mesic paleoenvironments, these fossils provide the earliest direct evidence of anurans in wet tropical forests.