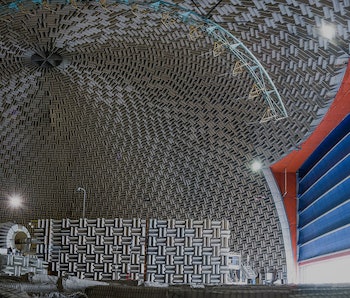 If you’ve ever lived near an airport or under a prominent airway, you’ve probably been rudely awakened by the whooshing of 100 tons of aluminum flying over your head. Unfortunately, with demand for faster aircraft, travel noise pollution could get a lot worse for those residing near a runway. But not if NASA has something to say about it.

Acoustics experts at the space agency’s Glenn Research Center in Cleveland are using the facility’s Aero-Acoustic Propulsion Laboratory (AAPL) — AKA the big ol’ dome — to evaluate the ruckus produced by jet engines. This rotund establishment has been used for auditory experiments for over 20 years and was recently used to evaluate the noise levels of a Learjet engine. This is where the turbines of the future will be tested in the hopes that engineers figure out a way to not deafen us all.

“This recent test succeeded in creating a simulated environment which closely matched flight tests, and the results provide us with a unique opportunity to investigate how well noise levels produced in the lab can be compared with flight test noise data,” said NASA research engineer Dennis Huff in a statement released Tuesday.

The dome is 65 feet high and 130 feet in diameter — making it a little over three giraffes tall and 12 alligators wide. All of those weird-looking bricks that cover the dome’s interior are 17,000 custom-designed fiberglass wedges to soak up those sound waves. This ensures there’s no echoing, which would make the jet engine seem a lot louder than it actually is.

To the bottom left of the image, you’ll see what what looks like the hilt of a giant lightsaber. That’s the Nozzle Acoustic Test Rig, a fancy wind tunnel designed specifically for acoustic and aerodynamic testing. Air is blasted through it so experts can simulate take-off and landing conditions up to speeds of 268.5 mph.

The light blue curve at the top of the photo is an array of microphones that measure noise levels and simulate a flyover. And the big blue door to the right is opened after testing to release the air from the test.

NASA has already tested retrofitting engines with acoustic liners to reduce noise emissions in jets. Testing of this volume dampening tech and other airplane innovations will all take place in the AAPL.

It all goes down in the dome.

More like this
Science
Dec. 1, 2022
Webb Telescope releases breathtaking new image of the “Pillars of Creation”
By Doris Elín Urrutia
Science
3 hours ago
7 stunning images from Artemis I's final trip around the Moon
By Jennifer Walter
Science
Dec. 5, 2022
Artemis I is on its way home from the Moon — after flying just 80 miles over the lunar surface
By Doris Elín Urrutia
Related Tags
Share: