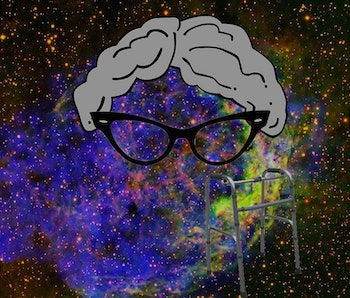 Rare stellar nebulae and your grandparents have one thing in common: deadly flatulence. Wolf-Rayet stars are energy-packed objects nearing the end of their lives that flood their surroundings with dense, swirling plumes of X-ray-emitting gas. Old folks, while perhaps being low-energy, also have a tendency of unleashing their own unsavory clouds of gas. So, it’s not unfair to say that Wolf-Rayet stars, like the one photographed below, are essentially cosmic geezers.

The psychedelic-looking image below is a perfect example of the type of billowy mass these stellar objects are able to produce. The European Space Agency used its XMM-Newton X-ray space observatory to render an image of the trippy nebula created by the star WR18, seen below. This astral fart, known as NGC 3199, is the direct result of the shockwaves created by the radioactive winds whipped up by WR18. Like human farts, this one is made up of a variety of gases, as shown by the various colors in the photo. And much like flatulence here on Earth, this gas bubble has wide-reaching effects on everything around it.

Wolf-Rayet stars are enormous and incredibly energetic, and so the gas they emit is extremely hot. As the plume spreads to neighboring areas, it heats up everything in its path. The resulting super-heated material, in turn, begins to emit X-rays, which we This is kind of like when your grandpa has one too many bowls of Raisin Bran and causes everyone in the room to wince. But you can’t turn farts into kaleidoscopic, watercolor-like pictures.

“The incredibly hot, diffuse, X-ray-emitting gas within the Wolf-Rayet bubble is shown in blue, while a bright arc that is visible in the optical part of the spectrum is traced out in shades of yellow-green (oxygen emission) and red (sulphur emission),” ESA noted in a statement.

Only three other Wolf-Rayet bubbles have been spotted releasing X-rays like WR18. Based on other observations, the ESA predicts that once this particular star runs out of fuel for its radioactive winds, it will violently explode in a massive supernova event — a final blast to mark the end of the stellar cycle.

So, while WR18 might share some qualities with your grandparents, at least they’ll huge you after they stink up the room instead of deep frying you with radiation.

More like this
Science
Jan. 22, 2023
You need to explore this amazing map of the Milky Way
By Kiona Smith
Science
Jan. 26, 2023
An asteroid will come within 2,200 miles of Earth tonight — here’s why you shouldn’t worry
By Jennifer Walter
Science
Jan. 26, 2023
Scientists find two key ingredients for life in ancient meteors
By Jeff Nagle
LEARN SOMETHING NEW EVERY DAY.
Related Tags
Share: