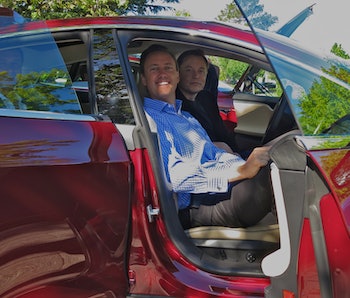 Elon Musk has been shaping the future of technology for longer than people may think. The entrepreneur and his brother Kimbal shared the story on Monday of how they brought door-to-door directions to their startup Zip2, which they believe to be the first time anyone offered such a service on the nascent world wide web — a feature that’s now a staple on practically every smartphone in the world.

“We asked the leading mapping data company Navtech if they’d let us put it on the internet,” Kimbal explained on his Twitter page. “It was 1995 and no one had ever asked. they just let us do it. No charge for data that cost them 100’s of millions of dollars. My bro did the coding and I helped w the interface. I nearly fell off my chair the first time I saw the coding results of my bro. Door to door directions - to anywhere in the Bay Area. And a live map built in Java that you could manipulate with your mouse. It was truly incredible. Just had to wait 60 seconds for each request.”

Maye Musk, Elon and Kimbal’s mother, shared an ad that showed Zip2’s array of features back in 1996. Alongside directions, Zip2 offered categorized business listings, personalized geographic searches, and cutting-edge advancements like automatic recall of a user’s address. Elon dropped out of his PhD at Stanford University to co-found the company and write the first version of the software to draw vector maps and calculate directions.

Zip2 was a huge success, both financially and culturally. Elon received $22 million after Compaq bought the firm for $341 million in 1999, and used $10 million of that to found X.com, which subsequently became PayPal. Zip2’s navigation features paved the way for the likes of Google Maps, Citymapper and Waze, and Apple CEO Steve Jobs used map-based navigation to highlight the revolutionary potential of the iPhone in its 2007 introduction.

Elon and Kimbal are working on a number of projects with the potential to shape the industry. Tesla, where Elon serves as CEO and Kimbal as board member, is working to roll out the first of its autonomous car features as soon as August.

Zip2’s idea received a new lease of life with the advent of mobile internet. It seems rather quaint now, but Zip2 helped change how people move around cities forever.

More like this
Innovation
Jan. 25, 2023
Starship orbital flight: SpaceX successfully loaded the rocket with over 10 million pounds of propellant
By Mike Brown and Molly Glick
Gear
Jan. 19, 2023
Why Apple's rumored smart display could be doomed from the start
By James Pero
Innovation
Jan. 28, 2023
The 5 best mini projectors for iPhones
By Debbie Lee
LEARN SOMETHING NEW EVERY DAY.
Related Tags
Share: