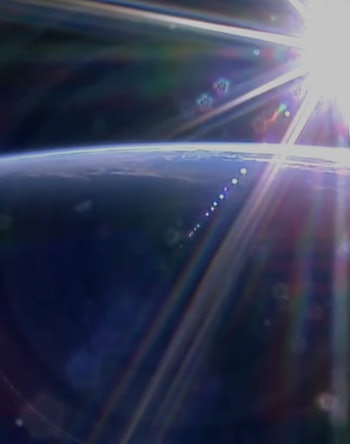 Late Sunday night Eastern time, NASA gave a signal boost to a hypnotic live streaming video that’s been turned on for more than four years, but can be easily forgotten about in a news cycle filled with updates on organic matter on Mars, SpaceX’s plans, and trailers for Neil Armstrong movies.

So it was cool and good for the space agency to again start live-streaming video of Earth, as seen from the International Space Station, once more. The four high-def cameras on the ISS may keep beaming video down to Earth for years to come, but they’ve got a cosmic challenge ahead of them.

Back in April 2014, SpaceX sent four high-definition video cameras (named: HDEV, or “High Definition Earth Viewing cameras”) to the ISS as part of the CR-3 mission. Inside a protective box, those cameras were mounted on the Columbus Lab on the ISS, the European Space Agency’s big chrome module that was added to the space station in 2008.

Together, the four cameras are called the Columbus Eye, and a live-streaming website is maintained by the University of Bonn in Germany. The school partnered with the German Space Agency (DLR) to establish the Columbus Eye program.

NASA gave an official-sounding acronym to the cameras which any member of the public would be able to buy: COTS, or commercial-off-the-shelf cameras. One video camera faces forward, two cameras face backward (“wake), and one camera faces below (“nadir”). They are connected via an ethernet cable to the space station’s computer and beamed down to Earth.

Beyond just showing imagination-capturing images of Earth, the cameras also have a scientific purpose on the ISS. Scientists will monitor the rate of degradation to image quality because of cosmic radiation as well as gauge how tough the housing for the cameras is when faced with those space rays.

The cameras are in a pressurized and temperature-controlled box and analysis of how it holds up “may help engineers decide which cameras are the best types to use on future missions.” Could be that data from testing being performed today will be used to protect the video camera mounted on a deep-space vessel in the future.

How to Track the ISS

This website set up by NASA also tracks the ISS and offers a livestream of the video. If the screen is black, the ISS is some 250 miles above the half of the Earth where it’s nighttime.

On the Columbus Eye website, users can track the location of the ISS over the Earth as it travels 17,150 miles per hour, or about 5 miles per second. The ISS orbits the Earth just about every 92 minutes, give or take a few seconds.

The ESA also operates an ISS Tracker portal that shows the space station’s location relative to the entire Earth, and when it’s over your hometown.

As astronauts who have experienced the Overview Effect will tell you, seeing Earth from above will change everything. It was a feeling experienced by NASA astronaut Leland Melvin, who recalled he experience to Inverse recently:

I look out the window, and I see the planet again. We’re going around it so fast and we’re coming over Virginia. I look down and I’m thinking, “My parents are probably having a meal.” Five minutes later, we’re over Paris, where Léo’s from, our French long-duration astronaut. And then Yuri, from Russia, can look over to the side and see his home.

And so, in this one little moment in time, we’re looking at our respective homes, breaking bread, and celebrating like we are in space. And that’s when this shift happened, because I saw so much of the planet in 90 minutes.

With the video live feed from the ISS, anybody with an internet connection can experience a sliver of the overview effect — as long as space radiation doesn’t degrade the video.

Listen to ‘I Need My Space’, the Inverse podcast that asks the universe’s biggest questions