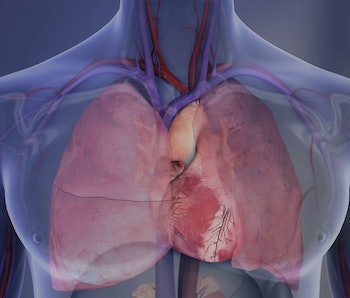 Erectile dysfunction is about a lot more than just your penis, say doctors. The condition is closely tied to the circulatory system, which makes sense since an erection occurs when spongy tissue in the penis engorges with blood. But new research indicates that ED could actually be a warning sign that there’s something seriously wrong with your heart. So listen to your dick. It might be trying to tell you something.

In a paper published Monday in the American Heart Association journal Circulation, doctors report that older men with ED have a doubled risk of heart attack, cardiac arrest, sudden cardiac death, and stroke (both fatal and non-fatal) compared to their peers without ED. They conducted the research by following 1,914 men with an average age of 69 and tracking their cardiovascular health over 3.8 years. Even after controlling for factors like age, race, educational level, and cardiac health, ED still emerged as a significant indicator of health risk. This indicates that someone with an ED diagnosis should receive heart health screenings as if they do show other risk factors for heart disease.

This research suggests that even though ED and serious cardiovascular events have similar risk factors — obesity, hypertension, smoking, diabetes mellitus, hypertension, and metabolic syndrome — ED all by itself can be a major warning sign of heart trouble in the near future. The researchers who conducted the study point out that many men won’t even realize they are at a higher risk of heart attack or other issues, and that this study can help doctors intervene more quickly.

“The onset of ED should prompt men to seek comprehensive cardiovascular risk evaluation from a preventive cardiologist,” says Michael Blaha, M.D., M.P.H., an associate professor of medicine at Johns Hopkins University and the corresponding author on the study, in a statement. “It is incredible how many men avoid the doctor and ignore early signs of cardiovascular disease, but present for the first time with a chief complaint of ED. This is a wonderful opportunity to identify otherwise undetected high-risk cases.” And there may be a pretty high number of these cases that have slipped under the radar.

Ten percent of men between age 40 and 70 live with total erectile dysfunction, meaning they can’t achieve or maintain enough of an erection to have sex. And 25 percent more have “moderate or intermittent erectile difficulties.” But ED isn’t just a problem for older men. Recent research suggests that more young men are being diagnosed with ED, too.

This latest study adds to the body of research that suggests ED isn’t a problem that occurs in isolation. Previous research suggested that it could be a marker of general health status, so if you’re experiencing problems, ignore the cardinal advice you’ve heard about sex and relationships over the years, and listen to your dick.

More like this
Science
6.27.2022 11:00 AM
Letting your cat go outside could spread “life-threatening” parasites — new research
By Amy Wilson, Scott Wilson and The Conversation
Science
6.26.2022 11:00 PM
The powerhouse of the cell has a more complicated origin than we thought
By Viviane Callier and Knowable Magazine
Science
6.23.2022 6:44 PM
Scientists discovered the biggest bacteria ever, and it’s the size of an eyelash
By Allison Parshall
Related Tags
Share: