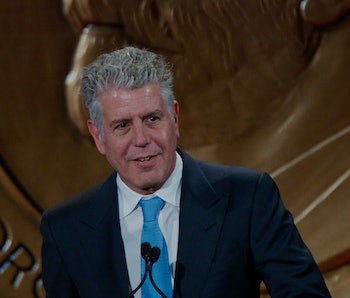 Anthony Bourdain, TV chef and host of Parts Unknown, has died at the age of 61. CNN confirmed the news of his death on Friday and stated that the cause of death was apparent suicide.

“It is with extraordinary sadness we can confirm the death of our friend and colleague, Anthony Bourdain,” CNN said in a statement in response to the news. “His love of great adventure, new friends, fine food and drink and the remarkable stories of the world made him a unique storyteller. His talents never ceased to amaze us and we will miss him very much. Our thoughts and prayers are with his daughter and family at this incredibly difficult time.

Users on social media shared tributes to the writer and chef:

CNN stated that Bourdain was in France filming a new episode of Parts Unknown, when French chef Eric Ripert, a friend of his, found him in his hotel room Friday morning.

Bourdain received the Peabody award in 2013 for his work on Parts Unknown. The award was given in recognition of the show “for expanding our palates and horizons in equal measure,” making special note of “the side-dish stories that make his visits so memorable and nourishing.”

If you or someone you know needs help, contact the National Suicide Prevention Lifeline at 1-800-273-8255.