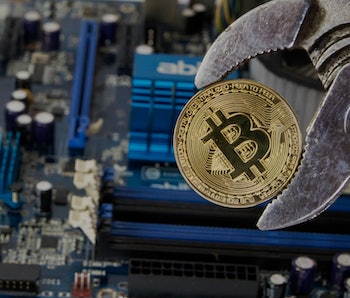 Cryptocurrencies may some day need to ditch the blockchain in order to scale up and go global. While the distributed ledger system enables trust-free transactions with strangers, it can also be rather slow and expensive, helping to explain the dearth of merchants who readily accept bitcoin or other cryptocurrencies as payment. Solving the problem may rely on “off-chain” solutions that do the hard work of processing the transaction instantly before it’s written to the blockchain later, with the ledger acting more as a dispute settlement system.

“Let’s say you and I, we are happy to do some transactions with each other,” Arthur Gervais, assistant professor at the Imperial College in London and the co-founder of off-chain solution Liquidity.Network, tells Inverse. “We don’t really need to use the blockchain unless we disagree with each other, which actually makes sense. Why would you need the mediator if you are actually in accordance with each other?”

Off-chain solves a number of problems. It alleviates stress on the blockchain, meaning users don’t need to pay transaction fees to miners that rose to $20 last year for Bitcoin. It also solves the scalability issue: Bitcoin, which introduced the blockchain as part of Satoshi Nakamoto’s 2008 white paper, can only handle around seven transactions per second globally, while major credit cards can handle over 50,000 transactions. Developers of the off-chain Lightning Network claim it can process “billions” of transactions.

However, one of the major issues the blockchain was meant to solve was the fact that users don’t need to trust each other to perform a transaction. To protect against bad actors, one solution suggested by Gervais is to request collateral, so users pledge their funds to the off-chain network, allowing users to see whether they have enough to complete the transaction. This may add complexity to the system, but Gervais says we already use different solutions when handling fiat currency.

“It’s very similar to having a purse on you,” Gervais says. “Do you carry a whole bank account there? No, you don’t. A fraction of your wealth that you own, you have in your purse, and this is used for everyday transactions. You’re not making a bank transfer every time you’re paying for coffee.”

How to solve the problem of rising transaction costs is a dispute that has caused large-scale fractures in the cryptocurrency community. Bitcoin Cash “forked” from the original Bitcoin in August 2017, as groups divided over whether to increase the blocksize from one megabyte to eight to allow for more data to be processed on the network at once. Bitcoin proponents point to the Lightning Network as a solution that resolves the scaling issue without needing to increase blocksize.

It’s unclear that cryptocurrencies can scale without some sort of off-chain technology, though. Gervais wrote his PhD on various ways to optimize the blockchain for transactions throughput. He wrote a simulator that analyzes all types of parameter combinations and a security model to analyze these scenarios for usability. Bitcoin Cash, according to his analysis, can maybe scale to 100 transactions per second with the right parameters, but the project won’t be able to scale beyond that and won’t be able to remove the transaction fees from the process.

While Gervais is in favor of off-chain solutions, he heavily criticized the decision not to increase Bitcoin’s blocksize as “just outrageous,” noting that “I still don’t understand why Bitcoin has never done it.” However, Gervais still described increasing the blocksize without also incorporating off-chain technology as a “temporary solution, maybe for a few months.”

The author of this story has a stake in Bitcoin and Ethereum.