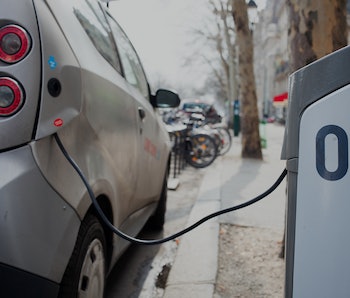 Electric car batteries could soon ditch the liquid electrolyte chemicals of yesteryear for a technology that’s more energy dense, more flame resistant, and optimized for the road. Researchers at Michigan Technological University announced the publication of three new articles this week around solid-state batteries — and the research could give a big boost to electric cars.

Solid-state batteries encompass a variety of techniques, but most of them involve dropping the liquids that conduct electricity and interact with the lithium, replacing them with an alternative, solid material. Solid Power, another company working on the technology that’s signed a deal with BMW, claims they could hold as much as double the energy — which would seriously boost the range of the Tesla Model 3 and Jaguar I-Pace from its approximate 300-mile range.

The research published this week analyzes the way lithium acts in a battery at scales under 500 nanometers, confirming that the material is surprisingly strong, a stepping stone to what engineers agree is essentially redesigning batteries from scratch. The papers were published in the Journal of Materials Research. Erik Herbert, the lead researcher and assistant professor of materials science and engineering at Michigan Technological University, tells Inverse these cells could pose an alternative to current electric car batteries batteries:

The short answer is yes, but naturally it’s a qualified yes. Although the solid-state architecture is years away, the scientific community is making significant progress towards that goal. To that end, the papers we just published are a significant step in that direction because they help us better understand the fundamental problems (some of them anyway) that have to be solved. The solid electrolyte solution will come about through more targeted testing and identification of the optimal chemistry, composition and processing conditions. All the battery people I run with are pretty convinced the problem(s) are solvable.

So what problems, exactly? While electric cars can use super-powerful chargers to replenish power in under half an hour, but that length of time remains a major hurdle for solid state tech. Then there’s the chemistry question: SolidEnergy, a firm spun out of MIT in 2012 that’s developing its own solution, opted to use a combination of solid and liquid electrolytes because it found an all-solid design does not conduct ions as well. However, there are signs a breakthrough could arrive — Tesla CEO Elon Musk hinted at “the most significant breakthrough in a while” during an August 2017 conference call.

When this technology will hit the road is another question. Although Herbert says he has “no idea” when this could happen, some players in the field have already made bold predictions that a shift is near. Solid Power CEO Doug Campbell told Inverse in January that he sees solid state batteries on the roads within five to 10 years, with automakers like Toyota joining BMW by expressing interest in the area.

More like this
Gear
Oct. 5, 2022
Citroën's new concept EV uses cardboard for parts — and it's brilliant
By Jackson Chen
Innovation
Oct. 2, 2022
EV ownership has a racial gap — one major change could bridge the divide
By Andrea Marpillero-Colomina and The Conversation
Innovation
20 hours ago
This is how scientists will predict the next massive hurricane
By Abe Musselman
Share: