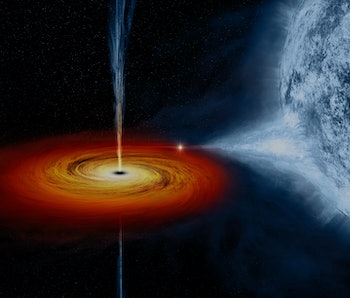 The Late Middle Ages gave birth to the danse macabre, an allegorical tale in which Death rounds up living people to party in a cemetery, reminding them that they’re all going to die. This story has fallen out of favor, but a new Astrophysical Journal Letters study on what stars look like before they get obliterated by a black hole suggests that celestial bodies, just like Medieval humans did, also take part in the Dance of Death.

The study, written by a team of astrophysicists headed by University of Copenhagen astrophysicist Lixin Dai, Ph.D., described a new computer model they created that simulates how stars get sucked into a black hole — a phenomenon they call a “tidal disruption event.” So far, all of the snapshots we’ve taken of black holes murdering stars only show part of the picture, and this model can help scientists see what’s hidden in that data.

You can see all the parts of this deathly dance in the diagram below.

In a previous article, Inverse explained the ins and outs of this diagram:

First, the star begins disintegrating into a disk of debris called an “accretion disk” because the black hole’s gravitational field is so strong. The black hole eats up all the debris (the slim part of the orange-yellow gradient), and once that debris enters the black hole, it gets “spaghettified” — stretched vertically and compressed horizontally into noodle-y streams of atoms — and slurped up.

However, the black hole can become “overfed,” so some stellar debris hangs out around the mouth of the black hole, not unlike crumbs left over on a facial beard (the fat part of the disk). These crumbs are important, because they’re what we can see from Earth: The process of getting sucked up is a hot one, and as the debris heats up, it emits light and radiation (shown as a double-headed arrow in the image), which we can detect from Earth. Now, even though our snapshots of black holes might show us only some of that crumb radiation, we can use the model to understand how big the mess actually is.

The model helped reveal the role of the other players in this scene. The outflow, Dai explains, is a wind launched from the surface of the accretion disk that “acts like a veil covering the disk from most of the angle.” Such “veils,” which show up in some black hole snapshots, make it hard for astrophysicists to fully understand what’s going on in these events.

Then there’s the funnel, which is like the windless eye of a typhoon; there, close to the black hole’s polar axis, you can actually see the stellar disk. The jet, meanwhile, is “a stream of highly energetic particles moving almost at the speed of light, ejected along the polar axis of the disk.”

There’s a lot we still don’t know about black holes, but we do know that getting sucked into one means certain death by gravity-induced spaghettification. Thanks to this model, we know what actually goes on in the precious few moments before a star submits to complete annihilation: it dances ‘til it’s dead.

More like this
Science
7.2.2022 10:00 AM
Astronomers discover a quirky star with a surprisingly galactic feature
By Nancy Atkinson and Universe Today
Science
6.23.2022 6:15 PM
Look! Hubble image shows a dazzling star cluster near the center of the Milky Way
By Kiona Smith
Science
6.26.2022 10:00 AM
In the search for dark matter, an unexpected tool may give scientists hope
By Antonis Antoniou and The Conversation
Related Tags
Share: