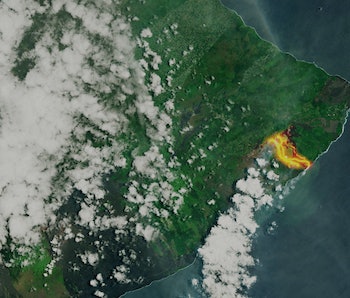 Up close in personal, Hawaii’s Kilauea volcano is actually the stuff of nightmares. It launched several refrigerator-sized molten boulders into the air, emitted a demonic screech, and created blue flames that look like Hades’s hair in Disney’s Hercules. But seen from afar, this terrifying force of nature actually offers insights into how the islands of Hawaii are constantly changing.

On Friday, the European Space Agency tweeted two images taken by its Sentinel-2B satellite on May 23. These aerial shots highlight the incredible lava channels flowing from the eruption site, but many facets of this image can go overlooked to the untrained eye.

“You can see the hotter fresh flows and a progression towards the older flows from this current eruption,” volcanologist Janine Krippner tells Inverse. “You can also see flows from older eruptions on either side. If you look a bit closer you can see the outline of Leilani Estates. In the wider-view image, you can see [the] Mauna Loa [volcano]. You can also see the diluted ash plume from the summit crater.”

While this volcanic activity has displaced many people and even injured someone with its lava splatter, this process is exactly what created the islands of Hawaii in the first place. As Krippner pointed out, the grey spots directly next to the active lava channels are igneous rock that was formed by lava cooling off during prior eruptions.

Since Hawaii is directly over a “hot spot” — smack dab in the middle of two tectonic plates — magma will continue to rise upward for years to come. This will create other volcanic eruptions, change the shape of Hawaii slowly but surly, and remind us that even though landmasses are just big hunks of rock, they are essentially living breathing things.

More like this
Science
Jan. 23, 2023
Earth's inner core may have stopped spinning — study
By Jon Kelvey
Science
Jan. 22, 2023
Astronomers find a surprise layer of volcanic rock in Mars’ massive canyon
By Kiona Smith
Science
3 hours ago
ChatGPT could help students cheat — but it could also revolutionize education
By The Conversation and Sam Illingworth
LEARN SOMETHING NEW EVERY DAY.
Share: