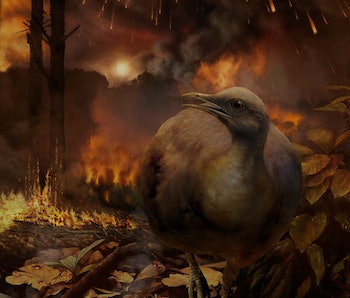 When a six-mile-wide asteroid struck present-day Chicxulub, Mexico, piercing the Earth’s crust and triggering a massive volcanic eruption, the dinosaurs were pretty much done for. The subsequent chain reaction of natural disasters ushered in the mass extinction event, which killed off the giant reptiles and pretty much any four-legged animals over 50 pounds about 66 million years ago. But a few small, extremely lucky animals somehow managed to survive.

A paper published Thursday in the journal Current Biology points to an oddly specific group of birds that lived and proposes a theory about how they did it. These birds, they write, survived the Cretaceous-Paleogene (K-Pg) extinction event because they were all lucky enough to be ground dwellers. Think about it: According to the fossil record, the extinction event incinerated trees for thousands of years, leaving few places for tree-dwellers to live. There also isn’t much evidence in the fossil record that any tree-dwelling birds made it. If there were no trees and no tree-dwelling birds — but we clearly have birds today — then, the study’s authors conclude, the birds who did survive the K-Pg event were not tree-dwelling. And these non-arboreal birds later evolved into the many species of arboreal birds that swarm today’s trees.

Using computer modeling that maps the relationships of fossil birds to those that exist today, the study’s authors provide support for their theory about how today’s birds, both tree-dwelling and not, came to be. (It’s not that strange that the ground-dwelling survivors eventually had arboreal offspring, as in evolution it’s not uncommon for the same adaptive traits to pop up multiple times in different species.) In addition to revealing the roots of modern birds, the new model helps explain why all the birds that went extinct in the K-Pg event — known in phylogenetics as the “stem group” — disappeared at once and why the surviving birds and all their descendants — known as the “crown group” — managed to survive.

“The explanation proposed here provides a unifying hypothesis for the K-Pg-associated mass extinction of arboreal stem birds, as well as for the post-K-Pg radiation of arboreal crown birds,” write the researchers, led by Daniel J. Field, Ph.D., an evolutionary palaeobiologist at the University of Bath. One of the challenges facing researchers seeking to unravel this mystery is the relative scarcity of bird fossils and the fact that the extinction event happened so quickly, making it hard to get a detailed timeline of extinctions.

This research is just one step in figuring out exactly what happened in the years following the asteroid strike and subsequent disasters. The complex web of events likely included shockwaves that knocked down trees, forest fires, and global cooling from all the soot and dust blocking the sun. The researchers write that, even amid all the factors at play, living in the trees seems to be what binds all the survivors together.

“Although a multitude of factors undoubtedly influenced avian evolution at the end-Cretaceous mass extinction, including diet, body size, breeding habits, and flight capacity, selection for non-arboreal habits appears to have left an indelible mark on the early evolutionary history of crown birds, clearly discernible more than 66 million years later.”