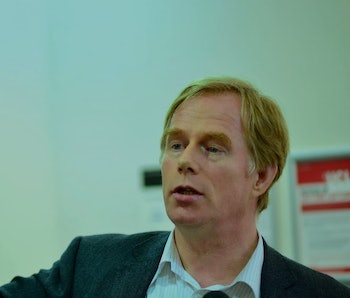 David Wood, a man that helped revolutionize communication in the early days of the smart phone, now wants to make the government smarter too. The British transhumanist helped pioneer today’s smartphone industry when he co-founded mobile operating system developer Symbian in 1998, and now he’s calling for changes that would radically rethink how people and politicians interact.

“Technology is presenting new opportunities, and politicians can’t keep up,” Wood tells Inverse. “In part because they don’t understand, but sometimes they have vested interests that encourage them to maintain the status quo.”

The early days of the smartphone augured the rise of a fully-informed populace with information at their fingertips. But as the rise of “fake news” or the example of the Cambridge Analytica scandal shows, these new tools are as easily appropriated by bad actors as they are to anyone else. The answer, Wood argues, is a democracy that can “engage more people, more fully than ever before.” It’s a tall order.

It’s a philosophy best exemplified by Wood’s book released last month, Transcending Politics: A Technoprogressive Roadmap to a Comprehensively Better Future, which starts by declaring politics “broken,” technology as something that “risks making matters worse,” and deems transhumanism the force that can fix it all “comprehensively”:

Fixing politics is the central challenge of our time, and hence the central theme of this book. If we can fix politics — if we can transcend its messiness and ugliness to enable its true purpose — we can facilitate profound positive progress in many other areas of life. But if politics remains broken, it could lead us to collective ruin.

Transhumanism is a movement that encompasses a broad spectrum of ideas, but philosopher Max More described it as “a class of philosophies of life that seek the continuation and acceleration of the evolution of intelligent life beyond its currently human form and human limitations by means of science and technology, guided by life-promoting principles and values.” Its practitioners are ideologically diverse, ranging from Zoltan Istvan, who ran in the 2016 presidential election to grant basic rights to cyborgs, to Peter Thiel, who has funded projects to discover the future of A.I. and humanity.

“Transhumanism has been traditionally thought of as offering three ‘supers’: superlongevity, superintelligence, and superwellbeing, which means we’ll individually be reaching higher plains of consciousness,” Wood says. “I emphasize a fourth, which is superdemocracy.”

This shift involves “people from all areas of life” getting involved in politics and discussions. Wood argues that such a shift comes around by ensuring that discussions are transparent, accessible, and by encouraging the skills of trust building. It’s a strong goal for any democracy, but the prospect of a new wave of technology could fuel its rise.

“People will get motivated to get involved if they see something big and tangible and credible, which is within our grasp,” Wood says.

Sustainable Abundance For All

It’s a sentiment expressed by others in the transhumanist community. Aubrey de Grey, the 54-year-old co-founder of the SENS Research Foundation, a group that believes the first 1,000-year-old person is already alive, claimed at a December 2017 Virtual Futures event in London that superlongevity will expand to the general population because “it will become impossible to get elected unless you have a manifesto commitment to have a real war on ageing.”

These benefits are within the grasp of the population, but it will require a shift in the way people consider politics.

Technology can incentivize this shift, but it can also aid its development. In his book, Wood notes 10 areas where new systems can help usher in this era. It includes educational systems that keep politicians reliably informed, encouragement systems that foster positive participation, accountability systems — basically automated codes of conduct — and bridging systems that encourage dialogue between people with strong disagreements. In the case of social media sites like Facebook that can silo off discussions with the aim of showing content people want to see, bridging in particular could help break down those bubbles.

While the tech industry has a slight reputation for favoring small government, Wood notes that his vision is more one of technoprogressivism, rather than technolibertarianism. “If we dislike the way politicians are intervening in the development of new technology, that’s no reason to say, ‘Let’s keep politicians out of this’,” he writes. “Instead, it’s a reason to ensure that we have a better quality of political involvement.”

Wood’s book is not a clarion call to get rid of politicians. It’s a book that notes the benefits of using technology to enable more proportional representation than what we see in common electoral systems today, the usefulness of expert opinion in the decision-making process, and perhaps most importantly, the cultural shift that needs to take place in society.