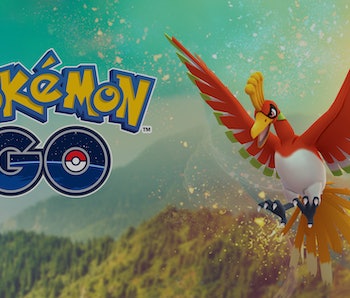 Charmander may be the featured Pokémon at Pokémon GO’s Community Day on Saturday, but all eyes are on Ho-Oh now that the Legendary Pokémon has temporarily returned to Raid Battles.

Dataminers first discovered a model for Ho-Oh last November, but the Fire/Flying type was only available for a few weeks. After months of fan requests, Ho-Oh makes its triumphant return on Saturday, giving players the chance to add the phoenix-like avian — as well as its shiny form — to their Pokédex.

To catch Ho-Oh, a player’s best bet is to head to a local park on Community Day. When in doubt of an optimal location, the League Map on The Silph Road is an excellent resource to find Discord channels of local groups. Experts also recommend speed-farming to maximize the chances of getting a shiny Pokémon before Community Day ends. The best times to do that anywhere in the Americas is between 11 a.m. and 2 p.m. Pacific.

While shiny Pokémon are considered very rare, there’s a chance that players will encounter a Ho-Oh in its shiny form after they beat the standard version in battle. Once the shiny Ho-Oh appears, which varies from the original due to its golden plumage and silver beak, catching it will be smooth sailing. Shiny Ho-Oh has a 100 percent catch rate.

Although shiny Pokémon have been a part of Pokémon Go for over a year, they were a “secret” feature until Saturday. Ho-Oh’s return was the first time developers formally acknowledged the existence of shiny Pokémon in the Pokémon Go in-game announcement. But, much like Ho-Oh’s last appearance, the flashy phoenix is only here for a brief stint. Players still missing the Legendary Pokémon from their Pokedex will have until June 7 to catch it.

In battle, Ho-Oh’s best feature is the Solar Beam attack, which helps it counter Rock-Type and Water-Type Pokémon. It’s a strong addition to any team and will surely be spotted at Gyms worldwide, so take advantage of the crowds on Community Day to catch this Legendary Pokémon.