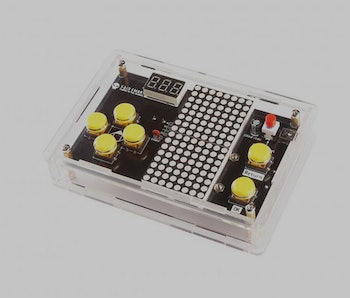 Are you a big gamer, or just one of those chill people who has a Nintendo DS gathering dust in a drawer somewhere? It doesn’t matter, because whoever you are, you’re going to want to get in on this seriously impressive Game Console designer kit.

If you’ve always wanted to build your own game console, or simply want to learn something new and impressive, but have no idea where to start, the DIY Game Console Kit V2 is the perfect thing for you. This complete kit will show you the way. Everything’s included, from the parts to the code, so you can build it from the ground up, and pick up some handy skills along the way.

When you’re done, you’ll even be able to play four cool retro games: Tetris, Snake, Racing, and Shooting. You can also add additional games by modifying the code (like a hacker!) or use it as is (like a normal person!) It’s a fun way to learn about DIY electronics, and it doesn’t hurt that the end point is a warm, fuzzy reminder of retro ‘90s gaming.

This new, upgraded version of the DIY Game Console Kit is easier to play, and the battery can be hidden inside. The code and schematics are available from the start, so you’ll never be lost in the project, and you can even run a USB power supply to it, if that’s your thing.

Normally $23.99, Inverse readers can take advantage of a limited time deal and get the DIY Game Console Kit V2

More like this
Innovation
17 hours ago
Artificial photosynthesis can grow plants without light — and may solve a planetary dilemma
By Steph Lee
Innovation
6.25.2022 10:00 AM
9 veggies that are healthier cooked than raw
By Laura Brown and The Conversation
Innovation
6.24.2022 5:00 AM
Beam-steering radio technology could help autonomous cars finally hit the road
By Sascha Brodsky
Share: