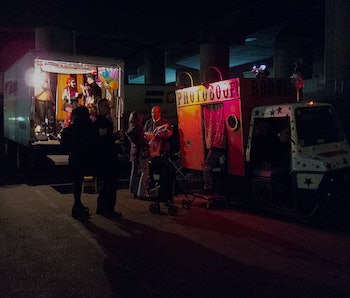 Its location was a secret, just like similar illicit New York events — but from the outside it looked like the sort of place you’d go only if you were just dying to be held at knifepoint.

We were in desultory non-trendy Brooklyn: cracked pavement, rust-roofed warehouses with shattered windows, abandoned train cars, crumbling walls splashed with graffiti. Things were quiet, with not so much as distant traffic sounds on the wind. Bouncing tumbleweed-desolate. On a Saturday night, we were armed only with cryptic instructions, in search of a mysterious event. Part underground party, part avant-garde art show, it was a choose-your-own-adventure that happens erratically and only divulges its location to a select few on the day of.

My friend S knew about it. S is the kind of friend we all have. She’s been to Burning Man multiple times, hitchhiked South America, and runs into someone she knows in every corner of the universe. When she invites you for a night out, the only way you can prepare is to keep an open mind and wear close-toed shoes. What you’ll do is anybody’s guess. Of course she’d know about this. But even to those who know, the directions aren’t exactly direct. They were as follows: Make a left at Onderdonk. Find the house named Vander Ende-Onderdonk. Then look for the man in the yellow flower hat. He will lead you the rest of the way.

We wandered streets looking for a house that sounded more like a Dutch painter than a landmark in an urban wasteland. Then, we saw a person. “Is that the man in the yellow hat?” one of our friends asked. As we drew closer to him, we saw that not only was he not wearing a yellow hat, he was pissing in the middle of the road. He nodded at us as we passed. Vaguely unsettled (“I just wish he’d waited to put his dick away before he made eye contact,” our friend said) we turned a corner and finally came to the man in yellow — a woman, actually, in the middle of a street lined by warehouses. With her straw hat and placid smile, she could have just as easily been on a beach. “Hi,” said S. “We’re looking for…you know.”

Yellow Hat Woman raised her eyebrows and gave us a Mona Lisa smile. “You know,” said S, clearly not wanting to violate all the cloak-and-dagger rules. Yellow Hat Woman filled in the gap, “Are you looking for — a market, perhaps?”

“Yes,” said S. “Yes we are.” I was bewildered; was “market” some sort of password? Apparently so, because Yellow Hat Woman tipped her hat at us. “To go the rest of the way,” she said, “take a left at the next street, then a right. Go over the bridge where you see the spider. You’ll find what you seek on the other side.”

We continued on, past the miniature river of a spewing fire hydrant, past a faded mural of a cartoonish green face with a Cheshire Cat grin, past a sidelined train car that even hobos had long abandoned. “She’s definitely sending us to an empty lot where a cult of people in flower hats are going to make us drink Kool-Aid with them,” one of our friends said. In front of us, near the train car, a black arch loomed, skeletal against the night sky.

Up in a high corner, like the Bat-Signal, was the faintly glowing purple shape of a spider. We checked our watches. It was midnight. According to S, the event was disappearing at 1:00. We hustled.

“If we get murdered, I’m going to kill you,” I told S. The stairs up to the bridge were narrow and uneven and smelled like sweat and cigarettes. Up on the bridge, we could see overgrown grass trying to swallow train tracks below. To our left, in moonlight, we could just make out mechanical equipment, piles of dirt,and the boxy shapes of dumpsters. On the other side of the bridge, we came to the end of our journey: a wide expanse of pavement surrounded by warehouses and that construction yard. It looked the same as all the other empty lots we’d passed, but lined by U-Haul trucks and clusters of people milling around.

Music thudded out of the back of the nearest truck. Black curtains obscured the inside. After waiting in a brief line alongside people in regular shorts and sandals and in fishnets and blue hair, we went up the ramp leading into the truck. Inside was a miniature strip club. Chairs lined the walls of the trailer and glitzy gold decor was everywhere. In the middle was a handful of dancers, decked out like a cross between ‘20s flappers and your average modern strippers.

Though they made efficient use of the small space, there wasn’t really anything to do besides get a lap dance or stand awkwardly in a corner. My phone rang, and I stepped outside. Another friend was supposed to meet us. “I’m so lost and confused,” she said. “Where even is Onderdonk? Are you in fucking Amsterdam?”

“Keep walking!” I yelled over the music, leaning against the outside of the truck. “The man in the yellow hat is a woman! You’re probably near her! Listen carefully to what she says. The spider she tells you to look for is purple.”

I thought these directions were pretty clear, but my friend just laughed. “Are you even listening to yourself? It’ll be over by the time I find you and I’m so lost. I’m going to head home.”

Outside the next truck, a man in a top hat told us it was closing shop and wasn’t letting more people in. I was disappointed; sure, the journey had been fun in a mildly alarming way, but we came all this way just for a moving-truck strip club?

We drifted around the corner of the next warehouse. Then, an explosion: Someone set off a roman candle on the pavement in our path.

We dodged sparks and ran to a cluster of people and a few more trucks in an inlet between buildings. In front of us, where the sparks had been, a man now stood. He lifted a torch, threw his head back, and breathed a jet of flame. The firelight glinted off a backhoe peeking over the wall from the construction yard, making its metal jaws glow orange.

After the pyrotechnics, we checked out the rest of the trucks. One called the “spider” truck contained nothing but hammocks and ropes from floor to ceiling for people to crawl around on.

I left S dangling upside down by the roof and met another friend at one decked out like a mini restaurant. There was a long table with a checkered cloth and a host to check me in and give me a hand up the step into the truck. “If you have any food preferences, kindly consult that sign,” he said, pointing to a sign on the inside of the truck. If you have any food preferences, the sign read, get the fuck out of here. He bowed slightly. “Enjoy your meal!”

A man with a panini press on the back wall of the truck was passing around plates of “mystery grilled cheese,” some of which were better than others (one definitely had candy in it). As we were leaving the restaurant truck, the host called after us, “I hope your experience was sufficiently mysterious, have a mysterious night!”

The next truck was one I’ll call the Dick Pic truck. I’m not quite sure what it actually was, because I didn’t go inside —there were various dic pics hanging on the walls and a photo booth in the back. (Truly, an innovation: a way for men to take pictures of their dicks.) The final truck seemed mismatched. A smiling banjo player in a bowler hat stood outside, but violent thumps and bangs emitted from within. Inside, we found the source of the noise. Behind a Plexiglas wall, a small woman was going to town smashing a desk while a strobe light flashed. One of my friends decided he wanted a turn, so they gave him a heavy sword and sent him behind the wall to the pile of debris, where he went to town on a Christmas ornament. Christmas ornaments, it turns out, are hard to smash.

“Well,” he said, “I got a lap dance and smashed things with a giant sword in the span of half an hour. I don’t think I’ve been able to say that about any other night.” Our path back to the subway was more direct, and we realized that we could have gotten there far quicker without those batshit directions. “But it wouldn’t have been the same,” said S. I had to agree.

The trucks passed us on their way out, leaving the lot desolate once more, with no sign. Only the scorch marks in the pavement betrayed the night’s events.

We weren’t allowed to take photographs or videos and I didn’t want to be an asshole; however, someone took this video from a version of the event in San Francisco a few years back:

After the event — which I later learned was called The Lost Horizon Night Market, or just the ‘Night Market’ for short — I tracked down some of the people behind it.

Mark Krawczuk, who started it in 2009, explained the origins of the name. “It is a reference to two ‘disappearing’ places,” he said. “Shangri-La is a fictional place described in the 1933 novel Lost Horizon by British author James Hilton. Shangri-La is a hidden land and seems to appear and disappear, and the rules of the world are different there. The Night Market aspect comes from idea of the Floating Market of Neil Gaiman’s Neverwhere.”

The Floating Market is a bazaar which is assembled at irregular intervals, but always at night, at changing locales. It is a place where goods of all kinds are traded, and valid currency consists of anything the seller may place value in. Exchange ratios may seem grossly odd to outsiders — or they would, could they see the market at all…The Floating Market is always held in a public place. Examples are Westminster Abbey, the battleship Belfast anchored in the Themse, and even the famous shopping centre Harrod’s. Knowing when and where the next market will be is a commodity in itself. This knowledge is spread by word of mouth exclusively. If you cannot find the market, you do not deserve going there. It is interesting to note that there is no person or committee responsible for setting date and venue for the market. It seems as if the market itself just makes its next appearance known to a select few who will spread the word.

Jaclyn Atkinson, the artist behind the Spider Truck, explained that although it used to happen fairly regularly when Krawczuk was involved, this was the first Night Market in two years. (It’s no small feat to organize.) Although Night Market has previously only manifested in New York, San Francisco, and Philadelphia, that will soon be changing. “We’re taking it on tour this summer to major cities across the country,” she said. “The idea is that anyone can go, but the rule is no social media whatsoever. It gets passed by word of mouth the day of.”

So for those who read about underground events and think, “why can’t I go to things like this, why does New York get all the fun?” look for a mysterious night market coming to a city near you for one night only on an unknown date in a place you’ll need to venture down a rabbit hole to find. Good luck, and remember that the man is really a woman and the spider is purple — but then again, it might not be.