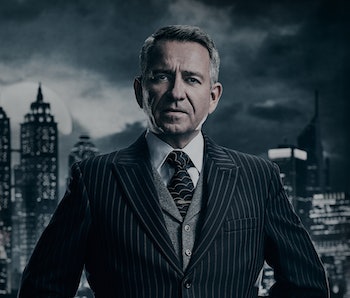 Of all the characters in the Batman family worthy of their own TV show, Alfred Pennyworth maybe isn’t one of them. But Gotham City’s most loyal butler is getting one anyway in Pennyworth, a new prequel series coming to Epix from Bruno Heller, the showrunners of Fox’s Gotham.

On Wednesday, The Hollywood Reporter reported that MGM cable network Epix has ordered Pennyworth straight to series for ten episodes. Developed by Heller, the series will chronicle a young Alfred Pennyworth in 1960s London, during his time as a soldier for the British Special Air Service (SAS). The series will not share any continuity with existing live-action DC properties, not even Gotham or DCEU films like Batman v Superman, but will be set in its own universe.

This effectively makes the big gag in the trailer for Teen Titans Go to the Movies, in which Robin sees Warner Bros. make a movie about Alfred, a reality. (We can also rule out time travel, even though Sean Pertwee, who plays Alfred on Gotham, is the real-life son of Doctor Who actor Jon Pertwee.)

Alfred’s backstory as a soldier is a relatively recent change to canon that actually began in the movies. In a 2012 interview with the official Facebook page of Christopher Nolan’s The Dark Knight Rises, actor Michael Caine said he “invented” the new backstory to help him in his approach to the role.

“[Nolan] lets you on your own a great deal because he’s so confident in his casting,” Caine said. “What happens is, like, I play the butler, so you haven’t got some great backstory for the blooming butler, but I invented a backstory … Bruce’s father went to the S.A.S. headquarters in Herefordshire to see an officer friend. He was in the officer’s mess and there was a sergeant there who had been badly wounded and couldn’t go back to the war, and he didn’t want to go into Civvy Street, so he took charge of the sergeant’s mess, and that’s me.”

Alfred’s military history was later made official in the comics, when in the 2013 epic Batman Eternal, Alfred revealed to Bane (long story) that he was ex-SAS. But while the SAS stuff is new, previous writers have tried to make Batman’s butler and his unseen history more interesting. Prior to Crisis on Infinite Earths, Alfred had been an actor and an intelligence officer who operated in France during the second World War. In the Batman: Earth One graphic novels, writer Geoff Johns made Alfred a former member of the Royal Marines.

There are currently no confirmed cast members for Pennyworth. Pertwee, is reportedly not involved, neither is Jeremy Irons, Michael Caine, or anyone else who has ever played Alfred in TV or film.

There is no confirmed premiere date for Pennyworth on Epix.

More like this
Entertainment
5.9.2022 2:00 PM
In 'The Time Traveler's Wife,' Steven Moffat comes full circle
By Dais Johnston
Entertainment
5.8.2022 2:52 PM
The new Doctor Who is a historic first for the sci-fi series
By Ryan Britt
Entertainment
5.11.2022 10:30 AM
Kevin Feige wants you to forget Ms. Marvel is Inhuman in the MCU
By Eric Francisco
Related Tags
Share: