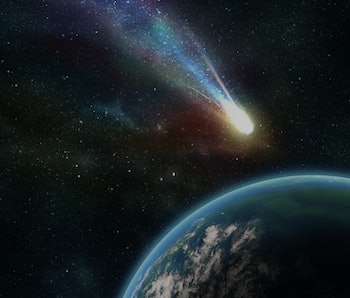 An asteroid about the size of the Statue of Liberty on Tuesday will whizz past Earth. For all of you freaking out about an impending collision, take a breath: The cosmic boulder is going safely soar right by our home world. And for everyone else hoping for impact…we’re sorry space has broken your heart once again — but hey, at least you get to watch it streak across the sky!

The object in question has been named 2010 WC9 and is estimated to be between 197 and 427 feet (60 to 130 meters) in size, so even on the smaller end, it would be longer than a football field. According to Earthsky, this sizable hunk of rock will fly by at roughly 28,655 miles per hour (46,116 kilometers per hour), which is over 37 times the speed of sound. What makes this celestial happening extra special is that it will come within half of the distance to the moon, making it one of the closest approaches ever observed for an asteroid of its magnitude.

Unfortunately, this space rock won’t be visible to the naked eye at any point during its journey past Earth. But for all of you space enthusiasts that still want to catch a glimpse of it, there will be some live streaming options. The robotic telescope service, Slooth, and the Northolt Branch Observatories will be streaming the event on Facebook as it makes it closest approach at 6:05 p.m. Eastern. Both broadcasts will be making use of professional-grade telescopes, which should offer a fantastic view if the weather cooperates.

Asteroid 2010 WC9 was initially discovered by the Catalina Sky Survey in Arizona back in November 2010 and astronomers observed it until December 2010 when it became too faint to see. Almost eight years later, it’s making a monumental comeback by getting up close and personal with Earth.

Don’t miss the return of this thicc, but also quicc, asteroid.