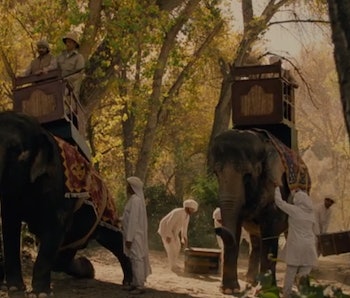 Westworld is a show about an entire population of robotic hosts who were created so rich tourists could use and abuse them. According to PETA, the third episode of the HBO show’s second season was a case of life imitating art. The animal rights advocacy group, never one to pass up a chance to get some publicity, wrote an open letter accusing HBO of abusing two elephants who appeared in the opening scene in Raj World. Or, at the very least, being complicit in their abuse. HBO denies the accusations.

“All elephants used for TV and film are trained through domination and painful techniques, including the use of sharp metal bullhooks and electric prods,” PETA’s Manager of Animals in Film and Television Lauren Thomasson wrote, according to Deadline. “Many animals develop abnormal behavior and become unhealthy, depressed, or aggressive because of the mistreatment that they experience.”

The letter goes on to state that one of the elephants in the episode, Tai, had been abused during her training by the handling group Have Trunk Will Travel as seen in an eyewitness video from 2011.

The letter, which was directed towards HBO’s President of Programming Casey Bloys, ends with a plea:

Considering the realistic and cruelty-free CGI technology that exists today, all wild animals in HBO series should be computer-generated, just the way the tiger was so beautifully done in last night’s episode. May we please hear from you right away to confirm that any plans to use live bears or other wild animals will be canceled and that you will pledge to stop using and exploiting wild animals? Thank you for your consideration. I look forward to hearing from you.

The CGI tiger in the episode actually looked kind of busted, because CGI hair is hard to do right, but that’s not the point. HBO responded to the accusations with a statement stating that the elephants were humanely treated on set, and that the network wasn’t responsible for how they may have been treated prior to their time on Westworld.

All of the animals featured on HBO series are treated with the utmost care and respect for their health, safety and well-being. A certified animal safety representative from American Humane was present at all times during any animal action on the set of Westworld. The AHA has confirmed that the animals were well-treated, and the production received the designation of “No Animals Were Harmed.” We are reviewing the circumstances related to archival training footage which included one of the elephants that appeared in the series. Of course, none of this video was shot during the production and does not in any way reflect practices on our sets.

HBO — which, to be fair, did cancele a show about horse racing called Luck after four horses died — seems like they weren’t abusing the elephants on the set of Westworld. PETAs larger point that by using animal “actors” they were complicit in the abusive industry holds more water, but PETA also once celebrated a shark attacking a fisherman as revenge and tried to get Ben and Jerry’s to make their ice cream with human breast milk. PETA is a lot, is what I’m saying, and their antics make even potentially valid criticism feel exhausting.

New episodes of Westworld air on Sunday nights at 9 p.m. There is no way that HBO is actually going to edit out any upcoming scenes using real bears because PETA’s letter scared them.