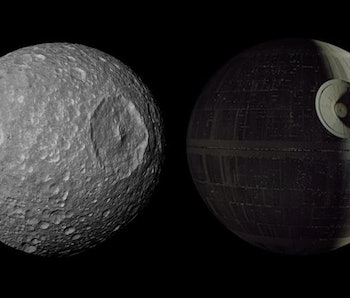 Nothing screams “total annihilation” more than stars. These shining orbs of fire are literally uncontrolled thermonuclear fusion (the same reaction that is used to make nuclear bombs) that goes on for billions of years. That’s probably what Emperor Palpatine was thinking when he settled on “Death Star” as the name for the Galactic Empire’s signature spherical weapon. But if he wasn’t so busy oppressing the galaxy he would have actually named it “Death Moon,” after one of Saturn’s many natural satellites.

Not only is Saturn the flyest planet in all of the solar system (sorry Jupiter), but the gas giant actually has a real-life version of the Death Star orbiting it. Say hi to Mimas, one of Saturn’s 62 moons that is straight up doppelgänger of the Empire’s favorite planet-destroying toy. No need to panic, Mimas won’t reduce Earth to ashes like the Death Star did to Alderaan. In fact, Mimas has been on the receiving end of some pretty massive astronomical collisions, which were to cause to its very science fiction aesthetic.

Mimas is pretty much a debris magnet. The moon has one of the most heavily created surfaces in the solar system. This giving it that wrinkly appearance that actually looks kind of like the channels and indents on the surface of the Death Star. Some of these craters can reach up to 25 miles (40 kilometers) in diameter.

But nothing compares to Mimas’ enormous Herschel crater, which looks identical to the Death Star’s massive laser blaster. The colossal indent is 88 miles (140 kilometers) across and covers almost a third of the moon’s 246-mile (396 kilometers) diameter. A creator covering the same amount of area on Earth would be around 2,500 miles (4,000 kilometers) across. Scientists believe this impact nearly obliterated moon, evidence of shockwaves can still be seen on the satellite’s surface.

While all of these craters weren’t made by Rebel Starfighters shooting it with lasers, it would seem like Mimas if far stronger than the Death Star ever was. A single blaster shot took down the Empire’s greatest feat of engineering, a massive asteroid couldn’t take out Mimas.

Looks like Palpatine should have taken some design tips from our side of the Milky Way.