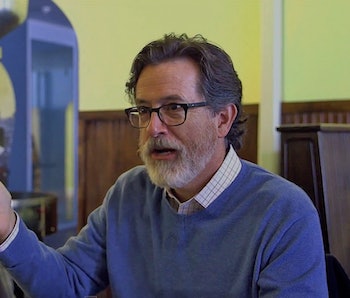 Where Jerry Seinfeld is doggedly, comically analytical, Stephen Colbert is not at all, ever. Whatever else he might be — a brilliant satirist, an unexpectedly accomplished beard-haver, a sorta devout Catholic — Colbert is basically a goofball. It should come as no surprise then that he and Seinfeld have almost no comedic chemistry. The two guys seem to like each other, but they seem to like each other in a way that requires them to say as much because it isn’t obviously the case. They don’t riff. They don’t conversate smoothly. They’ve got different stuff going on.

In the Colbert episode of Comedians in Cars Getting Coffee, our two protagonists take a small, vintage British roadster to a pleasant cafe and then stroll into a pleasant bookstore. When Colbert remarks that the “one thing he didn’t deny himself” when he was poor in Chicago was books, Seinfeld ends the conversation. “That’s pretentious,” he says. He’s, of course, wrong (that’s, in fact, totally reasonable), but Colbert, who’s never struggled to come up with a withering aside, gives him the pass.

What’s most interesting about the show — stilted convo aside — is the two men’s conversation about masculinity and George C. Scott. Seinfeld seems vaguely depressed by the feminization of men, wondering where the macho actors of the previous era have gone. Colbert could give a damn. Despite seeming like he stepped out of a Norman Rockwell painting, Colbert isn’t foolish enough to engage in nostalgia. He’s the deeper thinker, those thoughts just come from an emotionally rather than a purely intellectual place.

But it’s sort of beautiful to see how the two men are doing things that suit them. Seinfeld has his weird show that he kind of cares about and kind of doesn’t. Colbert talks America to sleep. Water seeks its own level. Coffee too.

More like this
Entertainment
Jan. 27, 2023
Onyx the Fortuitous and the Talisman of Souls is a cringe comedy as overlong as its title
By Andy Crump
Entertainment
Jan. 18, 2023
Everything you need to know about That ‘90s Show on Netflix
By Claire Fox
Culture
Jan. 26, 2023
Michael J. Fox’s strangest movie remains a stupid, ridiculous joy
By Mónica Marie Zorrilla
LEARN SOMETHING NEW EVERY DAY.
Share: