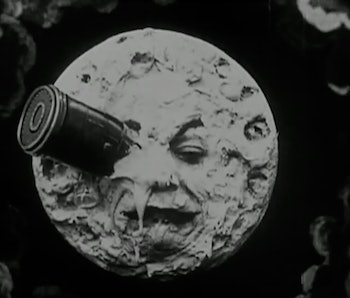 Google took the wraps off its first virtual reality homepage doodle on Thursday, celebrating the life and work of famed French film director Georges Méliès. The unveiling marks the 106th anniversary of the release of “À la conquête du pôle” — known in English as “The Conquest of the Pole” — and pays tribute to the groundbreaking techniques that propelled Méliès to legendary status.

“Méliès’ contribution to the seventh art was revolutionary,” Laurent Manonni, director of heritage at The Cinémathèque Française that partnered with Google on the project, said in a statement. “In a time when cinematography was nascent and almost exclusively documentary-style, Méliès single-handedly opened the doors of the dream, the magic, and the fiction.”

Born in 1861 in Paris, Méliès first helped out in the family shoe business before buying the Théâtre Robert-Houdin to explore his love of magic and stage theatrics. In 1895, the Lumière brothers held a demonstration of their Cinematographe film camera. Méliès was captivated, and got to work finding his own.

Between the years of 1899 and 1912, Méliès made over 400 films. He used his magician’s background to develop illusions like stop motion, fading out, slow motion and double exposure. His whimsical films brought a sense of charm to the nascent medium: one of his most famous films, “Le Voyage dans la lune” (“A Trip to the Moon”), sees a group of explorers shoot themselves to the moon in a capsule launched with a cannon. It’s enough to make modern-day space explorers like Jeff Bezos inspired.

Unfortunately, Méliès was left behind by an industry shifting to more commercial enterprises. He was pushed out of the filmmaking business by 1913, and he died in 1938 with little money to his name.

Around 80 years later, Google has used the latest storytelling technology to explain how Méliès pulled off some of his best tricks. The virtual reality tour looks at some of his brilliant techniques, like this one from “Le Voyage dans la lune,” where he would stop the camera and have the character walk out before resuming.

How to View the Virtual Reality Experience

It’s not the first time Google has paid tribute to a legendary filmmaker. The company previously produced a doodle to commemorate Sergei Eisenstein.

More like this
Entertainment
Jan. 27, 2023
Onyx the Fortuitous and the Talisman of Souls is a cringe comedy as overlong as its title
By Andy Crump
Culture
Feb. 1, 2023
Long Before The Fabelmans, Spielberg’s Catch Me if You Can was Being Misinterpreted as Sentimental
By Eric Francisco
Culture
Jan. 27, 2023
The Master was called a movie about Scientology, but it’s about so much more
By Dais Johnston
LEARN SOMETHING NEW EVERY DAY.
Related Tags
Share: