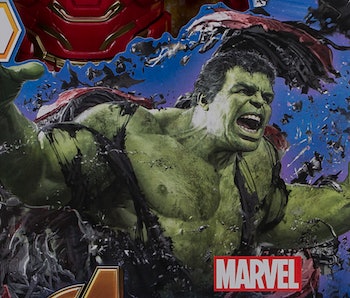 All of the Avengers, as well as pretty much every hero in the Marvel Cinematic Universe, rose up to fight Thanos in Infinity War. However, one of the founding Avengers only made a small appearance, technically. Now that the movie is out in theaters, new toys are suggesting that a popular fan theory was correct at one point, and that the Hulk was originally going to make a grand re-entrance.

The Hulk only really appears in one scene in Infinity War, because after Thanos defeats him during their brawl on the Asgardian refugee ship, he refuses to come out again, no matter how hard Bruce Banner tries to transform. It appears that, since this is the first time the Hulk has truly ever been beat or overpowered, that he’s scared. As a result, Banner is forced to use one of Iron Man’s Hulkbuster armors during the big battle in Wakanda at the end of the film.

Because the most iconic shot in the trailers featured the Hulk charging into battle alongside Captain America and Black Panther, many fans theorized that Banner might transform into the Hulk while he was inside of the Hulkbuster armor. That never happened, because the trailer lied to us.

However, images of a Hasbro toy set called “Infinity War Hulk Out Hulkbuster” and a special Gamestop-exclusive Funko Pop! both feature the Hulk busting out of the Hulkbuster.

Why, exactly, this scene didn’t make the final cut of the movie is a mystery. It’s possible that Hulk was never meant to reappear after that first fight, and these toys are just cool, non-canon collectables. Or, perhaps Hulk came back in an early draft of the script (and Hasbro and Funko were looped in at some point), only for Marvel to ultimately decide to end the movie with Bruce Banner rather than the big green guy. Or, maybe rumors of time travel in Avengers 4 will mean we’re in for a repeat of the battle in Wakanda, only this time the Hulk’s there.

More like this
Entertainment
8.2.2022 12:00 PM
Marvel could be hiding an extra Avengers movie in its Phase 6 timeline
By Alex Welch
Entertainment
8.15.2022 5:00 PM
She-Hulk will finally solve a confusing Avengers: Endgame mystery
By Alex Welch
Culture
8.7.2022 12:00 PM
Nichelle Nichols’ legacy was so much bigger than her Star Trek kiss
By Matthew Delmont and The Conversation
Share: