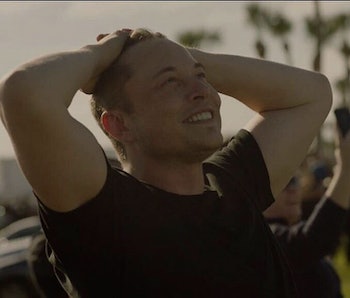 Elon Musk is making history. The SpaceX CEO shared an image through his Instagram account on Wednesday of a Falcon 9 fairing gliding through the sky with the use of a parafoil. While the sun-kissed scene makes for a dramatic shot, it actually shows one of the most important steps in the company’s aim to send humans to Mars.

The parafoil, deployed after reentering the atmosphere, is an important step in making rockets as re-usable as possible. The fairing is a protective shield used to guard the payload as it pushes through the atmosphere. While before the fairing would split through the middle to reveal the payload and fall back to earth, an upgraded version that uses a parafoil to save the fairing debuted during the February 22 launch of three satellites from the Vandenberg Air Force Base in Southern California. The fairing was meant to land on a recovery boat named Mr. Steven with a giant net attached to the back, but it missed by a few hundred meters.

The fairing is the next step in recovering as much of the rocket as possible. While each rocket costs around $62 million in total to build and send into space, the fuel only accounts for around $300,000 of that figure. The company has seen increasing success with landing the first stage booster on either a sea-based drone-ship or land target, with boosters making up the bulk of costs at $46.5 million. The fairing is a key step in reducing costs further.

It’s a key part of Musk’s goal to send humans to Mars as soon as 2024. The CEO outlined the “BFR” in September 2017, a fully-resuable configuration that can carry a payload of 150 tons. Two BFRs will go to Mars in 2022, drop off supplies and lay the groundwork for a mission just two years later where humans use the supplies to refuel the rocket and return to Earth after the mission.

It’s an ambitious goal — Musk described it at the reveal as “aspirational” — but the Falcon 9 work will demonstrate the company can meet the challenge. SpaceX’s next launch will see Bangladesh launch its first satellite in the Bangabandhu-1 mission, expected for May 7.

The mission to Mars is slowly taking shape.