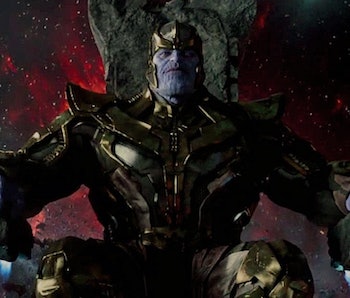 Fans already know the flick’s Big Bad, Thanos, from Guardians of the Galaxy and the previous Avengers movies. According to the original Marvel comics, an essential element of Thanos’s backstory — namely his unquenchable thirst for power and destruction — stems from the fact that he was born on Titan, a moon of Saturn (in the movies, he’s from a planet of the same name, located in a distant solar system). According to MCU lore, Titan was depleted of its resources, causing Thanos to lash out and make sure all the other planets in the universe suffered, too.

“[Thanos] is from a planet called Titan that’s no longer inhabited because of things that he thought he could help prevent, and he was not allowed to do that,” Marvel president Kevin Feige told Entertainment Weekly back in March. “What he feared most happened, and the planet and everybody on it basically went extinct. He vowed not to let that happen again. He thinks he sees the universe going down the tubes. He thinks he sees life expanding outward unchecked. That will bring ruin, he believes, to the universe and to that life.”

That all sounds awesome and diabolical, but let’s talk about the real Titan moon, because it’s probably the closest thing to a superhero world in our solar system.

Of all Saturn’s 62 known moons, Titan is definitely one of the most impressive with its ghostly green glow. It’s bigger than Earth’s moon — about 1.8 times its mass, according to NASA — and bigger than Mercury, too. It has a wild landscape, including electrically charged sand and a methane cycle similar to the water cycle here on Earth. Yes, that means methane rainstorms.

Even NASA seems bewildered by the whole thing:

On Titan it is so cold (-290 degrees Fahrenheit or -179 degrees Celsius) that water plays the role of rock and lava, and flowing methane carves river channels and fills great lakes with liquid natural gas. Vast regions of tall dunes stretch across the landscape — dunes whose “sand” is composed of dark hydrocarbon grains. The dunes are not unlike those seen in the desert of Namibia in Africa. Volcanism may occur as well, but with liquid water as the lava.

Although Titan is a moon, it has an atmosphere that’s very planet-like. Besides Earth, it’s the only world in the solar system nitrogen-rich atmosphere. That makes Titan prime real estate for research. As Inverse previously reported, researchers from Washington State University are working with NASA to design a submarine that could investigate Titan’s methane oceans sometime over the next 20 years. It’s still in the very early phases of development — and may never happen — but would be incredible if executed correctly.

Sorry, Thanos, but this is one of those cases where the truth is stranger (and better) than fiction. Your planet kinda sucks.