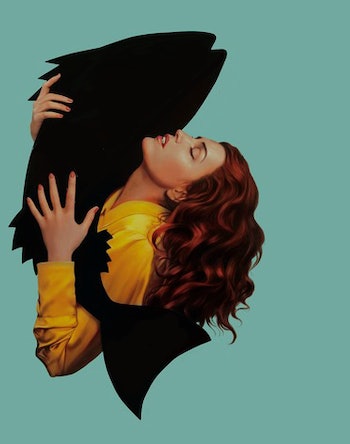 When readers meet Lucy, the protagonist in Melissa Broder’s new novel, The Pisces, she is visiting her sister in Venice Beach, trying to get her life back together following a bad break up. Instead, she falls in love with a merman.

Within the first pages of the novel, readers are welcomed to the tempestuous center of Lucy’s mind. As the official narrator, she takes readers from page to page while sharing her thoughts at their rawest. She discusses how she’s struggling to write her dissertation on the Greek poet Sappho, and then shifts to waxing on the intimacy she feels when picking up the “hot bags” of her sister’s dog’s “gigantic shits.” A discussion of her depression after breaking up with her boyfriend is mixed in with a takedown of a young couple, in which she deems him “fuckable” and her a “butter face.” Entering Lucy’s thoughts is uncomfortable at times, because it’s honest and maybe depressingly realistic. But therein lies the magic of The Pisces, and Melissa Broder, too.

Broder first came to prominence with her twitter account So Sad Today, where she’s known for documenting her most negative thoughts in darkly humorous detail. The account became so massively popular, it eventually led her to pen a collection of darkly funny and deeply personal essays.

Taking her first plunge into fiction with The Pisces, Broder manages to shift between Lucy’s somewhat rambling inner monologue and the greater narrative of the novel with adept clarity; a practice she compares to meditating. “The meditation practice sees the ocean, where the top of the ocean is choppy, but at the bottom there can be this complete silence, so both things can coexist,” she tells Inverse. “When I write at my best I’m able to integrate both the noise and the silence.”

Inverse talked to Broder about The Pisces, channeling her depression into a famous Twitter account, and how an addiction to unrealistic love can lead someone to fall for a merman.

So, why a merman? Were there other creatures you considered when you conceived this story?

Broder: After I finished writing So Sad Today there were still some themes from that book, particularly love as addiction, that I still wanted to explore. I was sitting on the beach in Venice reading this book called The Professor and the Siren, which is written by a dead Italian author. I started thinking about how much the relationship between mermaids and humans really embodies the dichotomy regarding a love that you want to annihilate oneself in. And I thought, what if it were a merman and what if it was now?

The merman captures this dichotomy between wanting to live in one moment of intoxication forever, which is only so intoxicating because it is a moment. That to me is so embodied by the relationship of siren and human.

The sex scenes in Pisces are pretty intense and graphic. Tell me about the process of coming up with them, and why you made those choices?

Basically, there’s two types of sex in the book. There’s good sex and bad sex. A lot of the sex she has with humans I would qualify as not the greatest. I always like writing bad sex scenes because it’s an opportunity to sort of reclaim the narrative of experiences from my own life where I didn’t have any power and now I have the power to reframe this narrative. And I can do it in a funny way and I make myself laugh.

Then with the sex she has with Theo [the merman], I really write to turn myself on. If I’m not turning myself on, it’s probably not a great sex scene. I will say, even with “good” sex scenes, I still feel pretty committed to a “pleasure realism” where she’s having sex with a merman, but she’s still concerned that it takes her a long time to have an orgasm.

Many of the characters in the book have distinct journeys, issues and coping mechanisms. Why was it important to show the various ways people struggle as opposed to focusing on your main character’s life?

When people are struggling with what some people call “love addiction,” I think there’s commonalities in what happens and that’s what Lucy gleans. I wanted each of these characters to represent different people in different situations who are all experiencing pain from this very human desire. For all of these characters, there is this interplay between fantasy and reality. You think you want love, but then you’re choosing someone who is intimacy averse, so you’re not going to get it there. Or you’re choosing someone like a merman with whom that can’t really be. Why is it that fantasy love is much more intoxicating than the real thing?

“Honestly my intent has always

been to save my own life.”

You’ve now publicly discussed anxiety and mental health in several written mediums. Are you hoping to change public perceptions of mental health, and if so, how?

Honestly, my intent has always been to save my own life. With So Sad Today, I started the Twitter account not to change public perception. I really started it because I was working at my day job — I have found with anxiety and depression that it’s cyclical — and I was in this really bad cycle and all the things I had done in the past to get me back to safer ground (like upping my medication or going to my therapist) weren’t working. I was really desperate, so I started this account really as a place to vent because it was things I did not want to tweet from my personal account, but I found that tweeting was a really good distraction.

Do you still post on So Sad Today for the same reasons you did when it began or have those reasons changed over time?

I think both. I am totally addicted. It is a dopamine fix, but why do I need dopamine? Probably because my brain chemistry is not what it should be. I think people that are content with living in the world don’t need to post on Twitter a thousand times a day and aren’t as hooked on that high. It’s like a rat pushing a lever or a gambling addict pushing a slot machine waiting to see the next numbers every time we hit refresh.

So, I think I was addicted to Twitter when I started tweeting from So Sad Today, which is why I chose to do that instead of write in a journal. There’s something about the interface that has always felt delicious to me. Sometimes I experience something in the world and I find it disgusting within myself, but then I’m able to reframe the narrative and find some redemption in sharing it. The difference is now it gets a lot of likes whereas when I was first doing it there was silence. I think probably the motivation is the same, but the payoff is much more crack-y now.

The Pisces by Melissa Broder, is available via Hogarth Books, on May 1.