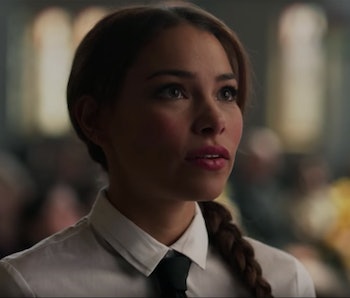 While Team Flash has been busy fighting the Thinker this season, many fans are still wondering about another new addition to the show. In the midst of the epic Arrowverse crossover, “Crisis on Earth-X,” the series snuck in the introduction of a waitress who has since become one of the season’s big mystery. Luckily, we won’t have to wait much longer for answers.

While her initial introduction included awkwardly crashing the WestAllen wedding, since then the character has come across quite nefarious. She has been circling members of Team Flash, but after clumsily bumping into Caitlin and Harry at Jitters, she suddenly got serious, which could mean her goofy, nice girl persona is all an act. Regardless of her intentions, she was seen writing in the strange language Barry was writing all over the place during the season finale when he emerged from the Speed Force.

Since her appearance at the wedding, fans have been tossing around many theories about her identity. Many believe she is a WestAllen relative from the future, such as their daughter Dawn Allen or granddaughter Jenni Ognats. We even threw the option of a gender-swapped Bart Allen into the mix.

Whoever she is, let’s hope she can help Team Flash defeat DeVoe because they really do need the help. On Tuesday, they brought in Earth-X’s Citizen Cold to help. In the following weeks, the villainous Amunet, Gypsy, and Arrow’s John Diggle will show up in Central City to offer a helping hand.

While it’ll be nice to get a real answer, from the sounds of Helbing’s tease, finding out her identity is just the beginning of her story.