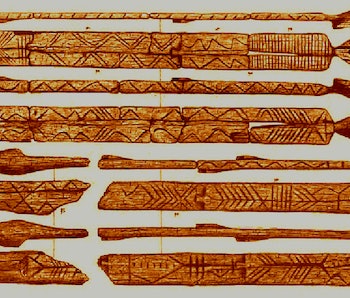 The last Ice Age ended about 11,700 years ago, turning the world on its head. Suddenly, forests sprouted up where snow once lay, and wildlife roamed the thawing landscape. The ancient humans who lived through it were likely extremely confused, and as scientists suggest in a paper published in Antiquity on Wednesday, their confusion is reflected in their weird art. A new analysis of a mysterious 16-foot statue known as the Shigir Idol, carved during that time, reveals new insights into the spiritual world of our ancestors.

Featuring human-like faces and zig-zagging lines carved into a larchwood log, the Shigir Idol was unearthed in 1894 by gold miners in Yekaterinburg, Russia, and has become more mysterious with every scientific examination. In the new paper, the Russian and German researchers write that the most recent analysis has revealed even more imagery on its surface and pushed back its age even further into the Earth’s history. Once thought to be around 9,800 years old, the latest round of radiocarbon dating, which dug deep into the core of the log, says it’s actually 11,600 years old. This new date allowed the researchers to draw parallels with other art from that period in the same region in an attempt to figure out what the heck it all means.

Some parts of the Shigir Idol have been lost, but an early diagram, drawn by Vladimir Yakovlevich Tolmachev in 1914, showed it had five distinctly human-like faces. But if you look more closely at the log, like scientists did in 2003 and during the most recent analysis in 2014, it has a total of eight. That the log depicts so many faces is unexpected in itself. Most of the art found in the region that dates back to the early Holocene shows naturalistic art — cave paintings of mammoths, wooly rhinos, and horses — while these strangely stacked faces suggest that the people who made it were capable of complex symbolic thought and abstraction. Until now, scientists generally thought that kind of art came about much later with the rise of late farming societies, not the hunter-gatherers that were around at the time of the Shigir Idol’s creation. “The vertical placement of the faces could indicate the presence of an internal hierarchy among the images, or a sequence of events,” the scientists write in the paper, noting that the idol offers “potential for a better understanding of the spiritual world of early hunter-gatherer-fishers of the forest zone of Eurasia.”

The art that comes closest to the Shigir Idol in terms of location, style, and age are the anthropomorphic, 20-foot-tall stone structures in Göbekli Tepe in Turkey, which scientists believe were also used in rituals because of their unusual Stonehenge-like circular arrangement. Drawing parallels between Göbekli Tepe and the Shigir Idol, the researchers conclude in their paper that it’s reasonable to assume the latter has spiritual meaning, since it’s becoming clear that humans living at the time were indeed capable of symbolic and spiritual thought. “Early Holocene hunter-gatherers clearly inhabited a symbolic world with richer and more complex forms of artistic expression than was previously believed,” the authors write.

There’s still a lot left to learn about the Shigir Idol, including figuring out what the zig-zagging lines mean, if anything. More conspiratorial minds have suggested that it holds a secret code, but we won’t be able to confirm or deny that until we get a better sense of the capabilities of its creators.

What we do know from the Shigir Idol is that the people who made it — like so many contemporary humans — couldn’t help feeling that there was something more to life than the mundane rocks, plants, and animals of the physical earth.

More like this
Science
Sep. 23, 2022
Ancient DNA reveals the shocking scale of Anglo-Saxon migration
By Jennifer Walter
Culture
Sep. 13, 2022
How one Ancient Greek thinker revolutionized math — and possibly started a cult
By Becca Caddy
Science
Sep. 24, 2022
Is a fact always true? A philosopher explains how to spot the difference
By Peter Vickers and The Conversation
Related Tags
Share: