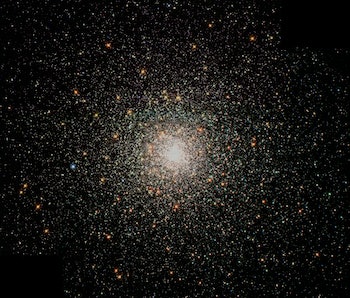 Simply by virtue of its size, space is grandiose. As Douglas Adams puts it in The Hitchhiker’s Guide to the Galaxy, the universe is “vastly, hugely, mind-bogglingly big.” Not the most flowery description of the cosmos, but one that certainly rings with truth.

Because of space’s truly cosmic proportions, it has long served as inspiration for all manner of artists: poets wax philosophical about our place in the dark abyss punctured by starlight; musicians sing of lonely astronauts and the irresistible tug of gravity; conceptual space artists arouse public interest with imaginative portraits of far-away planets.

Even scientists who have studied space all their lives find something special in how poetry is uniquely equipped to capture the beauty of space. One such specialist is Jackie Faherty, an astrophysicist at the American Museum of Natural History and guest on the fourth episode of Inverse’s space podcast, I Need My Space (available now).

Speaking to host Rae Paoletta, Faherty talks about how the vacuum of space lends itself to poetic language. She says that it’s oftentimes the work of writers and artists that encourages young people to pursue a career looking to the stars. Faherty remembers a line delivered by Jodie Foster in the space exploration movie Contact as a key source of inspiration.

“She’s traveling in space and looking around as she’s getting this tour of the universe, and she says this beautiful line — ‘They should’ve sent a poet,’” Faherty says.

Poetic descriptions of space aren’t just confined to fiction. Firsthand accounts of astronauts who have experienced the overview effect — the moment when, looking down from above, one realizes that Earth is a small part of an incomprehensibly giant universe — in similarly profound language.

In fact, if Faherty was looking to make contact with another intelligent species, she would turn to poetry. “The message that I would send wouldn’t be a mathematical symbol, it wouldn’t be something scientific,” Faherty says. “I would want to send a short poem from one of our great artists that describes the Earth in some way.”

Check out more from the conversation with Jackie Faherty in the fourth episode of I Need My Space. It’d mean the world to us if you subscribed, rated, and reviewed INMS.