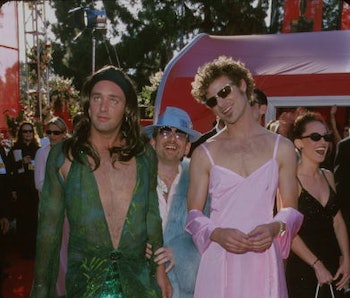 Matt Stone and Trey Parker just signed a deal with Comedy Central for five more years, which makes their dirty-mouthed kids the richest child stars in the world.

This means the series will have more than 300 episodes, which is more than almost any other show that isn’t a soap opera. It’s more than Seinfeld and Game Of Thrones combined. Additionally, Hulu is paying Stone and Parker half of a $192 million deal (the other half, to Comedy Central parent Viacom) to stream every episode, which is also more than they have paid for any other show including Seinfeld, which got a paltry $180 million.

Looks like Parker and Stone’s economic plan has paid off. I think we all know what the takeaway here is.

More like this
Entertainment
Jan. 15, 2023
3 ways Marvel Phase 5 can fix the MCU’s biggest problems
By Dais Johnston
Entertainment
16 hours ago
Last of Us Episode 3 release date, time, and trailer for HBO's zombie show
By Claire Fox
Entertainment
15 hours ago
Where and how to watch the 2023 Oscar nominees
By Mónica Marie Zorrilla
LEARN SOMETHING NEW EVERY DAY.
Share: