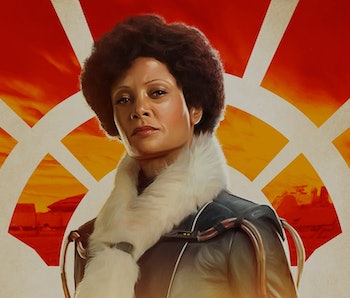 With Solo: A Star Wars Story quickly shaping up into an Ocean’s Eleven-style team heist story, we’ve finally gotten full character posters for every member of the team that Han and Lando join, as led by Tobias Beckett (Woody Harrelson).

Revealed on Monday, the nine new posters include the core cast we’re all familiar with — Han, Chewie, Lando, and Qi’ra — but they also offer the best look yet at quite a few other characters, namely Thandie Newton’s Val, Paul Bettany’s Dryden Vos, and even Jon Favreau’s Rio Durant. Beckett is a veteran thief that leads a team of criminals on a series of high-profile heists all for Dryden Vos, who’s some kind of mob boss. Val and Rio seem like pre-existing team members that give newcomers Han and Chewie a hard time.

It’s unclear so far exactly how the group comes together, but Qi’ra and Han know each other from a shared childhood on Corellia

Solo: A Star Wars Story will be released in theaters May 25.