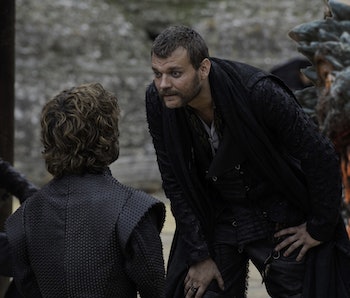 The final season of Game of Thrones is still about a year away, and fans know precious little about what’s going to happen when the hit HBO show returns. However, that hasn’t stopped ‘em from extrapolating theories from what little info is dripping out this far off from the premiere. Like, say, wondering if a new sailor character means that Euron Greyjoy is going to sail into the ruins of Old Valyria and obtain a mythical horn that can control dragons.

Winter Is Coming has a breakdown of what new characters HBO is seeking to cast for Season 8. One listing is for a “Sailor. Aged 35- 50.” The part is described as “a rough-and-ready sea-faring type with a weathered face and strong presence.”

When Season 7 ended, there were to notable naval plot lines. Up north, Jon Snow and Daenerys Targaryen were doing a little incest. To the East, though, Euron Greyjoy was setting sail for Esso to pick up the Golden Company, a famed mercenary group that Cersei Lannister hoped would turn the tides in her favor. German actor Marc Rissmann has already been cast as the leader of the Golden Company, Harry Strickland, but this theory argues that Euron might take a little detour on his chauffeuring mission.

See, in the A Song of Ice and Fire books, Euron is a much, much scarier dude. He’s got an entire suit of armor made of Valyrian Steel and is in possession of what’s believed to be Dragonbinder, a mythical horn that the ancient Valyrians can use to bend dragons to their will. Could Game of Thrones be adding a new, somewhat important sailor character to flesh out Euron’s journey to the ruins of Old Valyria to pick up a magical, dragon-controlling MacGuffin that’s never once been mentioned in seven seasons?

Or is Euron just going to maybe have a conversation with one of his sailors while bringing Cersei’s army across the Narrow Sea instead of opening up a huge can of worms with only six episodes to go?

Could go either way.

Game of Thrones Season 8 premieres in the spring of 2019.