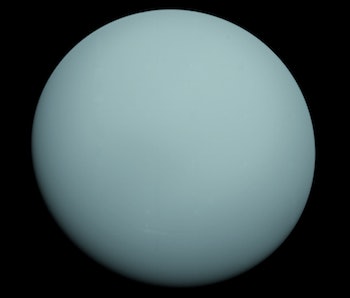 Uranus, the horrible, screaming lad of the solar system, is apparently as unfortunate as all those jokes make it out to be.

In a new study published Monday in Nature Astronomy, researchers detail their findings after analyzing infrared light from the Gemini North telescope in Hawaii. Using the telescope’s Near-Infrared Integral Field Spectrometer (NIFS), the team was able to observe light reflecting from Uranus’s cloud tops. They found hydrogen sulfide, the chemical compound responsible for the stench in rotten eggs and yes, farts.

“If an unfortunate human were ever to descend through Uranus’s clouds, they would be met with very unpleasant and odiferous conditions,” the study’s lead author Patrick Irwin, a physicist based at the University of Oxford, said in a statement. “Suffocation and exposure in the negative 200 degrees Celsius atmosphere made of mostly hydrogen, helium, and methane would take its toll long before the smell.”

Though Uranus has now been confirmed as a fart dungeon of death, the team says it might not be alone. It’s possible that in future studies, researchers will find hydrogen sulfide in our solar system’s other ice giant, Neptune. This would further separate Neptune and Uranus from the gas giants Jupiter and Saturn, where ammonia ice has been spotted in the cloud tops instead of hydrogen sulfide. The difference in cloud composition gives scientists a new lead in the mystery of how these gassy planets could have formed so differently from one another.

“We’ve strongly suspected that hydrogen sulfide gas was influencing the millimeter and radio spectrum of Uranus for some time, but we were unable to attribute the absorption needed to identify it positively,” the study’s co-author Glenn Orton, a physicist at NASA’s Jet Propulsion Laboratory, said in a press release. “Now, that part of the puzzle is falling into place as well.”

Methane in Uranus’s cloud tops absorb the red part of light from the sun, which is why the planet reflects a homogenous blue color. It’s such a placid-looking planet — no one would suspect how truly vile and stinky it is.

While NASA doesn’t have any formal plans in place to revisit the ice giants any time soon, back in 2017, the space agency announced that it was backing research in support of a project to visit Neptune and Uranus again. It’s possible that ice giant research will be an item on the next Planetary Science Decadal Survey, which outlines NASA’s goals for the coming decade — in this case, 2022-2032.

Hopefully Uranus won’t be discounted just because it smells bad. It’s still an amazing, mysterious world that deserves our love, even if it could kill us in 50 different ways.

More like this
Science
Jan. 29, 2023
NASA-funded study to research if bacteria could help form building materials on Mars
By Matt Williams and Universe Today
Science
Feb. 6, 2023
How the Webb Telescope is Rewriting What We Know About the Early Universe, One Galaxy at a Time
By Doris Elín Urrutia
Science
Feb. 4, 2023
Astronomers May Be on the Cusp of a “Potentially Revolutionary” Cosmological Breakthrough
By Universe Today and Matt Williams
LEARN SOMETHING NEW EVERY DAY.
Related Tags
Share: