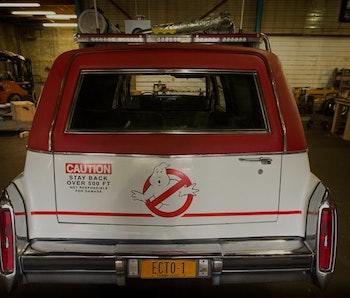 Ghostbusters director Paul Feig has been ginning up a lot of publicity for his upcoming remake of everyone’s favorite Harold Ramis franchise by leaking images from the set on Twitter. His latest hit? A picture of the reimagined Ecto-1, the so-called Ghostbustermobile. Unlike the original, which had conspicuous tail fins and a comically rounded hood that made it seem vintage in the eighties, the new car is comically square and ‘80s-ish. To be more specific, it appears to be a late ‘80s (probably 1987) model Cadillac Brougham hearse with an aggro paint job.

What does that mean for the Ghostbusters? No idea. The first Ecto-1 was built out of a late-model Cadillac ambulance/hearse so it’s in keeping with the series and not a spoiler on any level. That said, this could be big news for fans because it means almost anyone can afford their own Ghostbusting car. It won’t even be that expensive.

Old Cadillac hearses show up on eBay with an almost unnerving regularity. Some sell for less than $1,500, but the average seems to hover in the $2k area. Funeral homes keep their cars spotless so most used hearses are actually in great shape, which makes the purchasing process that much easier.

You’re going to need a way to shout witty things at Big Apple extras as you drive toward the ghost/demon/Stay Puft Marshmallow Man. You can get one for cheaper, but it won’t work. Let’s be professional about this.

Beacons come in a wide variety of flavors, from the annoying to the mind-boggling annoying, but this one feels about right for an Ecto-1. It’s sort of a tasteful, middle-of-the-road compromise.

The Ghostbusters put a lot of stuff on the top of their car. It’s what they do. And to make it easier, they have attached a ladder to the side of the car, specifically a maritime ladder. Fortunately, BoatLadders.com is a real place on the Internet. Problem solved.

3D printing is awesome because it makes it that much easier to accomplish our incredibly stupid goals. The Ghostbusters have a spooky hood ornament. Printing a new one should cost under $50 if you head to Shapeways.

Presumably Ghost-riders are going to have to paint their new black whip white then add the requisite blue and maroon detailing. The white paint will run you a bit, but the base coat will make it possible to skimp on the other colors. “Maroon Meteor,” the perfect color, can be a bit hard to find at smaller retailers, but Walmart stocks it.

So, yeah, we’re gonna call this now and say that you’ll be passing an Ecto-1 on the highway summit in the not too distant future.