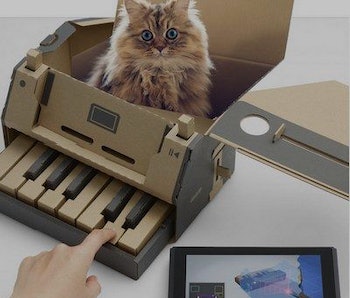 Nintendo released its DIY interactive cardboard kits for the Nintendo Switch on Friday. The Nintendo Labo lets gamers build and design their own Toy-Con devices to use with their Switch consoles. Social media had plenty of posts showing adults and kids having fun with their cardboard controllers, but it was cats that were truly in awe.

Included in the Nintendo Labo kit are cardboard sheets to build Toy-Con RC Cars, a fishing rod, motorbike, house, and a piano. Once built, the various cardboard controllers can be played with such as using the fighting rod to actually fish in a game. Nintendo’s posted a video on YouTube Friday featuring Bill Nye as he builds the various Toy-Cons.

On Twitter and Instagram, users showed that cats, in particular, could not keep their eyes off of the Toy-Con RC Cars.

This little fella in the red bowtie looks at the Toy-Con RC Car from a distance.

A kitty bravely struck down the cardboard menace.

This is one fraidy-cat took a short leap when the cardboard car started moving.

A black cat takes a look under the hood of the Toy-Con RC.

The kid is enjoying it, but the cat is waiting and seeing.

One cat starts off the video wondering what this infernal contraption is that’s moving across the floor then a second one shows up equally confused.

2. In Search of Fish

This cat was far more focused on the Toy-Con fishing rod. Whether it was hoping for a fish or simply enthralled by the string hanging from the rod, only the cat knows for sure.

Unimpressed with the Nintendo Labo, this cat indulges in the time-honored feline tradition of sitting in a box.

Honorable Mention: A Robot Dog on a Piano

There were hardly any users on social media showing their dogs interacting with the various Nintendo Labo creations. However, one Instagram poster let their Aibo, a robotic dog made by Sony, go to town on the Toy-Con piano.

Nintendo Labo kits are available for purchase and work exclusively for the Nintendo Switch.