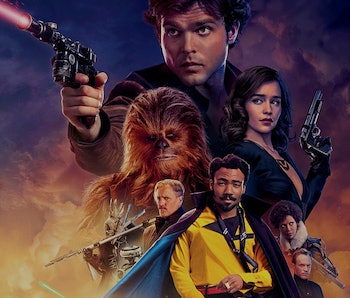 Here’s something that’s true: Star Wars fans are spoiled. Despite the fact that Han Solo, Chewbacca, and Lando Calrissian have been beloved sci-fi characters for over three decades there’s still a collective audible groan from the internet about the impending release of the next Star Wars film; Solo. Fans have said “no one asked for this” or have complained about “too much nostalgia.” But, the haters are crazy. Even if critics and hardcore mainstream fans say Solo sucks, it will be great. Here’s why.

More than any other Star Wars movie, Solo represents an intersection between generations. And that’s because it was written by a father and a son, together. On Wednesday, appearing together on the Star Wars Show, Lawerence Kasdan and Jon Kasdan talked about their experiences of writing the script for Solo side-by-side. “Can a father and son even be in the same room together for so much time?” both Kasdans joked, interrupting each other and finishing each other’s sentences.

“When I agreed to do Solo, I said, I can’t do this without Jon,” the elder Kasdan said, which, when you stop to think about it is pretty damn sweet. For those already furious that the younger Kasdan was given the job of helping to write Solo by his daddy, check yourself for a second. Lawerence Kasdan didn’t need to include his son on the writing process. Lawerence Kasdan wrote Raiders of the Lost Ark and co-wrote The Empire Strikes Back. The guy has script-writing chops. The fact he collaborated with Jon speaks of something more interesting than nepotism. Instead, it feels like this Star Wars movie is a bridge between one generation and another.

No matter what you thought of The Last Jedi, most fans would probably agree that not every single Star Wars movie should feel like that. If the whole saga hit the same somber notes of The Last Jedi, then the franchise would get too self-important, too brooding, and just too damn sad. After three new Star Wars movies full of depressing events — Han’s death in The Force Awakens, the death of everyone in Rogue One, and Luke’s fate in The Last Jedi — it feels like it’s time for everyone to lighten up a bit. And with Solo, the saga is having a straight-up adventure again. Sure, we’ll get some of Han’s young angst, but that’s pretty light compared to the heavy-handed fare Star Wars has been doling out lately.

Arguably, the guy who invented this kind of light adventure feeling was Lawerence Kasdan with Raiders of the Lost Ark. If you think of Indiana Jones as an anachronistic adventure hero and not much else, you’re probably right. Unlike Han Solo, we’ve not attached much to Indy beyond nostalgia for his lovable ruggedness. But, because Han was part of a bigger story, the zeitgeist forced the character to be “important,” which, is arguably unfair to the scruffy space cowboy.

In a sense, this is where Lawerence Kasdan collaborating with his son makes perfect sense. Jon Kasdan doesn’t see Han Solo the same way his father does. Jon is from a generation that grew up with Han Solo, meaning the importance of the character to the fans is built into how he helped write the character. The elder Kasdan may have helped shape the swashbuckling origins of Han and Lando, but the younger Kasdan understands why the fans still connect with these guys, several generations later.

And, if nitpicky Star Wars fans can’t get down with the elegance of such a one-two-punch approach to writing a movie about Han, Chewie, and Lando, then they are welcome to watch something else. The rest of us will be cheering and laughing in the movie theater as the Millennium Falcon blasts into hyperspace. In some ways, for the very first time. - Solo is out on May 25 everywhere.