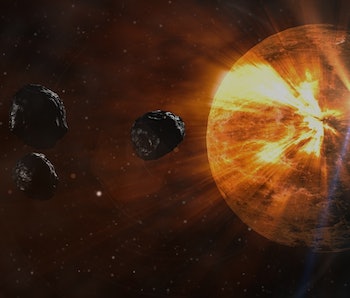 No, the world is (probably) not ending today, so please rest easy. But there appear to be some people on the internet who think it will, resulting in a conspiracy theory.

What began as a humorous post on Twitter imploded into a full-fledged conspiracy theory back in March. A user with handle @strayedaway__ sent out a tweet of an alleged “voicemail” he apparently received from an unknown number that contained what sounds like cross-wired military code. This audio seems to reference a danger zone off the coast of Indonesia with a possible tragic outcome.

Twitter users took the opportunity to decipher the messages, and one of them even translated it using Morse code, which yielded this bizarre and creepy quote: “Message received is well related to Stephen Hawking’s death, you are not ready to face them.” As you may remember, the late Hawking had many predictions about the future and was an avid researcher of extraterrestrial life. We’re pretty sure, however, Hawking was not talking about whatever the hell this is.

While there is no evidence any of the message has to do with aliens or a potential “attack” on the world, @strayedaway__ wasn’t the only one to claim he’d received the coded voicemail. Another Twitter user claimed her mother received the same message on her phone.

As of Wednesday, April 18, the Twitter “premonition” appears to be a hoax, as the world is obviously still here and very much intact. And to clear the minds of any skeptics, the original Twitter user posted a tweet in March about the viral conspiracy theory: “Anyways my point is a lot of you are getting so caught up in this, I am 99% sure the world isn’t going to end on April 18th or whatever date that is being spread around. Just relax. Go read some creepypastas if you wanna scare yourself. Please don’t make me into one of them lmao.”

Anyway, with the world spinning on as it does, maybe remember to file your taxes while you still have time.

More like this
Gear
3 hours ago
How Elon Musk plans to use Twitter for creating an 'everything app'
By Jackson Chen
Entertainment
Sep. 25, 2022
Knock at the Cabin trailer gets roasted online for one bizarre mistake
By Alex Welch
Culture
Oct. 4, 2022
You need to watch Spielberg’s most divisive sci-fi movie on Amazon Prime ASAP
By Robin Bea
Share: