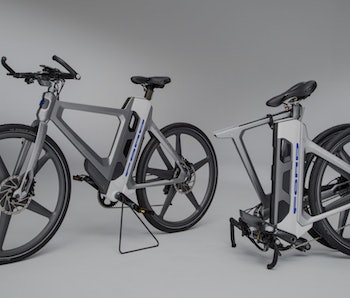 Ford is upping its fold-up e-bike game with a new model that’ll warn riders about upcoming potholes. The model vibrates when you’re in danger, meaning that you could potentially crash and have a vibrating bike land on top of you. Hopefully it doesn’t come to that. It probably won’t.

The alarm on the MoDe:Flex works by connecting the custom Ford app to your Apple Watch, feeding you data on the weather, traffic conditions, and state of the road ahead. It’s uncertain exactly what data Ford is using for this system, but it could be pulling old traffic reports or transportation department alerts, meaning your handlebars will likely give you the occasional unnecessary scare.

Ford’s statement comes on the heels of Land Rover announcing that its cars will start reporting pot holes. Presumably there is some sort of car/bike detente building even as we lose faith in our government’s ability to responsibly update infrastructure. Does this mean that Ford is going to start building in its own pothole sensors? It’s hard to know, but that doesn’t sound unlikely.

Either way, getting from point A to point B is becoming a team sport.