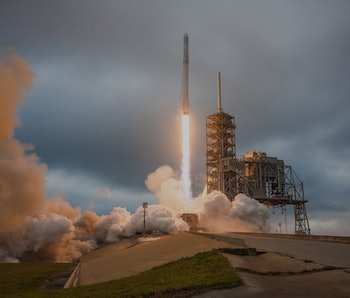 Barring any unforeseen setbacks, SpaceX will launch NASA’s Transiting Exoplanet Survey Satellite (TESS) at 6:51 p.m Eastern on Wednesday. The launch was originally set for Monday evening, but was delayed mere hours before TESS was set to take off. SpaceX was cryptic about the reasons behind the delay, citing the additional analysis of guidance, navigation, and control systems.

But in comparison to the estimated number of exoplanets in the Milky Way, finding 20,000 doesn’t seem too hard. NASA scientists posit that there could be trillions of exoplanets, making the TESS goal seem quite modest. Still, it’s a far cry from theorizing about exoplanets to actually confirming that they exist.

If everything goes smoothly on Wednesday, TESS will be embarking on a two-year sightseeing tour of the cosmos. During its extraterrestrial journey, the satellite will be monitoring up to 200,000 stars in the Milky Way in search of exoplanets — planets that exist outside of our solar system. NASA scientists hope that TESS will discover around 20,000 new exoplanets, a lofty goal considering that we’ve only found 3,700 up to now.

TESS is NASA’s most ambitious attempt yet to catalog the vast number of planets in our galaxy. The Kepler Spacecraft, which was launched in 2009, discovered around 2,700 exoplanets, so TESS is a big step up from its predecessor. Because TESS’s hardware is much more sophisticated than Kepler’s it’s estimated that the satellite will have examined around 85 percent of the visible galaxy during its mission.

The launch will take place at Space Launch Complex 40 in Cape Canaveral Air Force Station, Florida. Live coverage of the event will be available on NASA’s website, and SpaceX will be posting a livestream of the event on YouTube. The stream above will go live at the time of the launch.