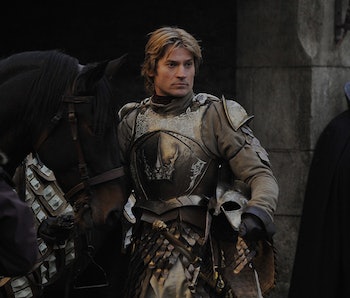 The very first episode of Game of Thrones premiered on April 17, 2011 —exactly seven years ago. That means, due to the long break between seasons 7 and 8, this year will be the first year without a GoT premiere. Since there’s no new Thrones in the immediate future to look forward to, let’s use this anniversary to look back at the show’s humble beginnings, well before it became the juggernaut it is today. It might be hard to remember, but some notable critics hated Game of Thrones when if first came out.

Flash back to 2011, well before Ned Stark’s prophecy that “Winter is Coming” came true. Heck, back in Season 1, Sean Bean was still an actor on this show. Three days before Game of Thrones premiered on HBO, The New York Times published a now-infamous television review that boiled the show down to “A Fantasy World of Strange Feuding Kingdoms.”

Writing for The Times, Ginia Bellafante showed she did not care much for George R. R. Martin’s work of the fantasy genre, and she assumed nobody else really did either:

If you are not averse to the Dungeons & Dragons aesthetic, the series might be worth the effort. If you are nearly anyone else, you will hunger for HBO to get back to the business of languages for which we already have a dictionary.

The most baffling part of the review, though, comes when she assumes that women don’t like fantasy as a rule:

The true perversion, though, is the sense you get that all of this illicitness has been tossed in as a little something for the ladies, out of a justifiable fear, perhaps, that no woman alive would watch otherwise. While I do not doubt that there are women in the world who read books like Mr. Martin’s, I can honestly say that I have never met a single woman who has stood up in indignation at her book club and refused to read the latest from Lorrie Moore unless everyone agreed to The Hobbit first. Game of Thrones is boy fiction patronizingly turned out to reach the population’s other half.

It’s a bad review, not so much because Bellafante didn’t like the show (she’s entitled to an opinion, as is everybody) but because of the conclusions she jumps to, assumptions she makes, and broad, dismissive brush she paints with.

Nancy deWolf Smith at The Wall Street Journal also hated the show, for what it’s worth, writing a review with the headline “Servants, Swords and Sad Sex.”

That said, plenty of other reviewers liked it from the get-go, including writers at Entertainment Weekly, The New York Post, The Los Angeles Times, and more.

Game of Thrones is not a perfect show, and there are plenty of valid criticisms of it then and now. This seventh anniversary flashback should not be viewed as an attempt to drag a couple of reviewers for dragging the show back then. Instead, it’s just a reminder that sometimes you can’t predict how successful things are going to be. A bastard can be the King of the North and rightful heir to the Iron Throne, and a genre show can become the biggest sensation on television.

Game of Thrones Season 8 premieres in the spring … of next year.