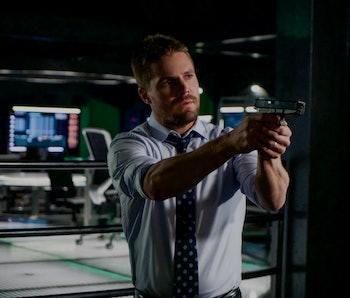 Season 6 Arrow has thrown a lot of adversaries Oliver Queen’s way. First, it was a team of bad guys led by Cayden James, but then Ricardo Diaz turned out to be the bigger mastermind and became the biggest thorn ever in the Green Arrow’s side. With one villain for Oliver to defeat, the series then turned his own allies, even Diggle, into adversaries. The last thing Oliver needs is more bad guys, so naturally, the series brought back an old Arrow villain to cause more trouble.

On Arrow Episode “Fundamentals,” Oliver is left with very few allies after John’s departure from Team Arrow. With only Felicity and Quentin Lance on his side, Oliver has to save his job as Mayor and take down Ricardo Diaz. Making matters worse, he gets dosed with Vertigo and comes face-to-face with an old adversary.

With Vertigo in his system, Oliver begins to hallucinate and among the faces that show up is Season 5 big bad Adrian Chase. There’s a pretty badass fight, in which Oliver snaps Adrian’s neck before Queen realized he’s been dosed.

The series of hallucinations all aim to tear Oliver down. Adrian says Oliver is his own worst enemy while Rene and the other former Team Arrow members rake him over the coals for his mistakes. The argument about Oliver being a better man these days or not rages on. Except this time, it was an internal debate — a debate that almost leads Oliver to complete a suicide mission.

Adrian is not the episode’s only return. Oliver also sees Laurel — his Laurel — in a hallucination set right before he got on the Gambit with Sara then another in a hospital room right before her death. During a season where both Quentin and Oliver have been trying to make Black Siren their Laurel, it is nice to see Earth-1 Laurel, even under these circumstances.

Turns out, Oliver’s lawyer dosed Oliver because he’s also working for Diaz, which is the list of Queen’s concerns after he’s impeached. All part of Diaz’s plan to dismantle Oliver Queen by ruining his life, but it seems instead he’s inspired Oliver to go solo by choice and embrace something that resembles Season One’s Hood.

With six seasons and a new son for Oliver, Arrow has chosen the perfect to explore what kind of man, and hero, he’s become. The introduction of new team members, like Dinah Drake, made the show feel fresh, but this arc has allowed for a reexamination of the series star.

Arrow sets up a great new dynamic. Oliver’s a committed, and solo, Green Arrow and Lance is the Mayor. So, are we up to Arrow 4.0 now? 5.0?