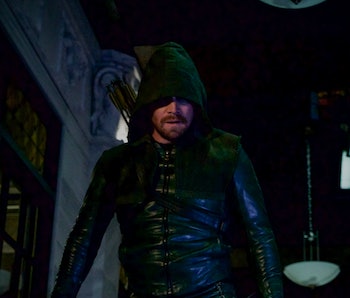 It’s been awhile since Oliver Queen has reminisced about his earlier days as the Hood. But a new tweet from star Stephen Amell suggests Arrow will revisit yesteryear in the next episode, “Fundamentals,” airing on April 12.

On Tuesday, Arrow Amell tweeted an on-set photo of himself in his old “Hood” costume from way back to the first season of the CW series. (The photo was also released by the CW.) Amell gave no caption, other than a thinking emoji. But most interesting is that it’s not an old photo. Upon closer inspection of Amell’s surroundings, you’ll see that he’s standing inside the renovated Star City police department, a new set introduced earlier this season.

A flashback this is not. The Green Arrow is dressing up as the Hood once again.

The episode’s summary also suggests the past coming back to haunt the Star City Mayor. “In his darkest place yet, Oliver (Stephen Amell) wonders if he has failed at everything - being a father, a mayor and a hero,” reads the episode’s official summary. “His frustration rising, Oliver lashes out at Felicity (Emily Bett Rickards) and William (guest star Jack Moore). A surprising visit from an old friend has Oliver questioning his next move.” A preview trailer for the episode also revealed a shot of Amell in his old costume.

In the current season of Arrow, Oliver Queen wears a tactical uniform as the Green Arrow. But when he was the wanted vigilante known as “The Hood,” Queen wore a modernized version of Robin Hood’s getup. Queen wore that costume until Season 4 of Arrow, where he formally adopted the name “Green Arrow” and wore a new outfit to go with the identity. In Season 5, Felicity added sleeves to give him protection for his sweet biceps.

See the photo below.